This quirky correlation in Asia's fourth-largest economy, where air pollution outstrips industralised peers, stems from an old belief attributed to coal miners - that the slippery pork oil helps cleanse dirt from their throats.

For middle school student Han Dong-jae, eating greasy barbecued pork belly on a smoggy day is a life lesson imbibed from his mother.

"I eat more pork when fine dust is dense like today," said the 15-year-old as he dug in over a sizzling grill at a barbecue restaurant in Seoul with his mother after school.

"I think it's somewhat helpful, because pork meat has oil and the oil soothes my throat."

Scientists say there is no rationale for the belief, but pork sales jumped about a fifth on the year from Feb 28 to March 5, when pollutants blanketed most areas, data from major retailers E-Mart and Lotte Mart showed.

South Korea faces a battle against unhealthy air, a combination of domestic emissions from coal-fired power plants and cars, and pollutants wafting in from China and North Korea. 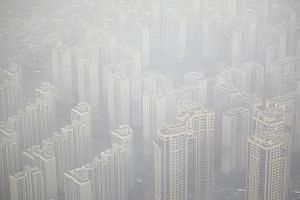 Masks out in force as air quality in South Korea plummets

Its air quality was the worst among its industrialised peers in 2017, data from the Organisation for Economic Cooperation and Development (OECD) grouping of wealthy nations showed.

South Korea registers 25.1 micrograms per cubic metre of fine particulate matter smaller than 2.5 micrometres on average each year, just over double the OECD figure of 12.5, but far lower than the world average of 44.2.

The pollution has affected South Korean policy and businesses, driving up shares of companies that make air purifiers and masks.

Legislation this month included a measure designating the problem a "social disaster", which could unlock emergency funds.

Dr Cho Seog-yeon, an environmental engineering professor at Inha University, called for more study of the exact damage wrought by high levels of concentrated pollutants, adding, "We don't know now where the damage is done (by air pollution)."

People battle the air pollution by wearing masks and staying indoors. But in a country where 28 per cent of all households have a pet, furry companions are a priority too.

Ms Cho Eun-hye, who lives in the north-western city of Incheon, bought a mask for her 18-month-old brown Korean Jindo dog, Hari, who needs to be walked two times a day.

"It's inconvenient, but I think we have to keep living with that," said the 36-year-old office worker.