ON BOARD THE PAPAL PLANE, ITALY (AFP) - Pope Francis said on Tuesday (Sept 25) that he will have the last word on naming bishops in China after a "bilateral dialogue" on candidates, days after an historic accord paved the way for rapprochement between the Vatican and the Communist country.

Roman Catholics belonging to the underground church in China that recognises only the authority of the Vatican will also "suffer" because of the deal signed last Saturday, the pope admitted aboard the plane flying back after a visit to the Baltic states.

"It's not just about nominations, this is a dialogue about possible candidates. It's done through dialogue," Pope Francis told journalists aboard his plane. "But Rome names (the bishops). The pope names them. That's clear."

Beijing and the Vatican last Saturday announced a provisional deal on who appoints bishops in the world's most populous country.

Shortly afterwards Pope Francis recognised seven clergy appointed by Beijing, which has not had ties with the Vatican since 1951.

There are an estimated 12 million Catholics in China, divided between a government-run association whose clergy are chosen by the Communist Party and an unofficial church which swears allegiance to the Vatican.

The Vatican had not yet released details of the accord and had avoided mentioning the process through which future bishops would be nominated.

"My thoughts are with the resistance, the Catholics who have suffered, it's true," the pope said of the Chinese underground church.

"And they will suffer. There's always suffering in an accord."

Pope Francis has sought to improve relations with China since he took office in 2013, but previous attempts foundered over Beijing's insistence that the Vatican give up recognition of Taiwan and promise not to interfere in domestic religious issues.

The Holy See is one of only 17 countries that recognise Taiwan, officially known as the Republic of China, instead of diplomatic ties with Beijing.

The breakthrough came as churches were destroyed in some Chinese regions in recent months, and there has been a clampdown on Bible sales. Crosses have been removed from church tops, printed religious materials and holy items confiscated, and church-run kindergartens closed. 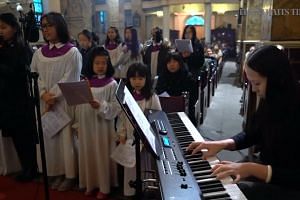 Following the announcement, the pontiff recognised seven bishops who had been ordained in China without the approval of the Holy See.

The pope also posthumously recognised an eighth bishop who "had expressed the desire to be reconciled with the Apostolic See" before he died last year, it said.

The Vatican cut ties with Beijing two years after the founding of the communist People's Republic.

Some have warned that Beijing could use the accord to further crack down on Catholic faithful.

"We pray for the suffering of the few who don't understand or who have behind them so many years of living in secret," the pope said.

"When there is a peace agreement or negotiation, the two sides lose something. That's the rule."

The pope hailed the historic deal that was reached after years of negotiations, despite repeated setbacks.