WASHINGTON (BLOOMBERG) - US Secretary of State Michael Pompeo leaves on Friday (Oct 5) on a four-day Asia trip to shore up weakening support for sanctions against North Korea and plan a second meeting between President Donald Trump and North Korean leader Kim Jong Un.

Mr Pompeo will spend less than a day on the ground in Pyongyang meeting Mr Kim and seeking to flesh out US expectations for his regime to denuclearise. But his hosts will be looking for US flexibility on North Korean demands to improve ties and even reach a formal end to the Korean War in conjunction with progress on the nuclear front.

The top US diplomat, who has struggled to weave optimism about a brighter future for North Korea with tough talk that Mr Kim hasn't done enough to merit sanctions relief, finds himself increasingly isolated, not only from traditional adversaries Russia and China, but also from South Korea - and, perhaps most importantly, his own boss.

"Pompeo goes over there with very little leverage," said political science professor Vipin Narang of the Massachusetts Institute of Technology. "The wind has gone out of maximum pressure."

While the US insists North Korean sanctions remain in place, South Korean Foreign Minister Kang Kyung-wha told reporters in Seoul on Thursday that her government might seek exemptions from the international sanctions regime.

"Virtually every significant South Korean company has investment plans for North Korea, and they all want to get on with it yesterday rather than tomorrow," said Mr Kenneth Courtis, chairman of Starfort Investment Holdings, an investment, private equity and commodity group, and a former Asia vice-chairman of Goldman Sachs Group.

They're not the only ones. The US says China and Russia are undermining sanctions, a crucial development given their roles as the country's chief economic lifelines.

And then there is the US President. 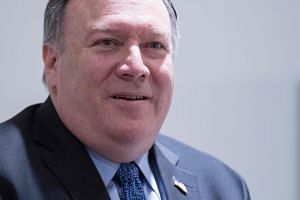 US ready to restart talks with North Korea immediately, denuclearisation to be completed by early 2021: Pompeo

As he did with his previous secretary of state, Mr Rex Tillerson, Mr Trump has undercut Mr Pompeo's efforts to maintain a united stance within the administration and among allies in the face of decades of North Korean intransigence.

At a rally last week in West Virginia, Mr Trump extolled the "beautiful letters" he got from the North Korean leader, saying the two men "fell in love".

More crucially, Mr Trump told reporters in New York last week that he didn't need to commit to a firm timeline for North Korea to give up its nuclear weapons.

"We're not playing the time game," Mr Trump said on Sept 26 on the sidelines of the United Nations General Assembly. "If it takes two years, three years or five months, doesn't matter."

That contradicted Mr Pompeo's statement earlier in the month, when he praised North and South Korea for pushing for denuclearisation by 2021.

Mr Pompeo later distanced himself from that time frame, saying the 2021 comment "wasn't mine" and was merely a reiteration of commitments made by the leaders of North Korea and South Korea at an earlier summit.

But in a meeting with reporters in June, Mr Pompeo said he expected "major disarmament" to occur within the President's first term.

Mr Pompeo will begin his Asia trip by meeting Japanese Prime Minister Shinzo Abe on Saturday. He will brief South Korean President Moon Jae-in in Seoul on Sunday evening after arriving from Pyongyang, then make a stop to meet Chinese officials in Beijing on Monday before returning to Washington.

The trip to Pyongyang will be Mr Pompeo's fourth overall and first visit since July, when he spent the night and left with little to show for his journey. Mr Kim had snubbed him to visit a potato farm. Soon after the secretary of state left the country, North Korea issued a statement lambasting his "gangster-like" demands.

Despite public criticism from analysts that the US has obtained little on the denuclearisation front, Mr Trump and his team point to a lack of nuclear and missile tests since late last year as signs that their strategy is working.

And at his news conference last week, Mr Trump claimed that there is more progress behind the scenes than the public recognises. Mr Pompeo has said the US is "making the progress we need".

Those comments led some analysts to speculate that the administration is getting private commitments from North Korea that would make it more confident about the prospects for success. In any case, they say that North Korea's tough public statements in the past don't necessarily mean talks have broken down.

"I would hope that the negotiating team has a solid list of deliverables that they want from the North Koreans in exchange for concrete steps," said Ms Jean H. Lee, director of the Wilson Centre's centre for Korean history and public policy. "They're not going to reveal that publicly."

In recent weeks, US officials have argued that there has been progress. They point to a meeting in Pyongyang between Mr Kim and Mr Moon, when North Korea committed to dismantling a missile-engine-testing site and raised the possibility of doing the same at its Yongbyon nuclear-enrichment facility.

"I'm optimistic that we'll come away from that with better understandings, deeper progress, and a plan forward not only for the summit between the two leaders, but for us to continue the efforts to build out a pathway for denuclearisation," he said on Wednesday.

Despite that positive outlook, there is a growing consensus among outside observers that the best the US can hope for is that North Korea follows a path tread by India, which achieved nuclear weapons status in the late 1990s, but - by avoiding provocative acts since then - has become an important ally in the region.

"Donald Trump is playing into North Korea's game plan, which is to convince the United States and the international community to accede to a permanent nuclear-armed North Korea, or agree to live with a North Korea that has nuclear weapons for a long time to come," said Mr Evans Revere, a former US diplomat in South Korea.