XIAMEN - Prime Minister Lee Hsien Loong said on Thursday (Sept 21) that he hopes his visit to Xiamen in Fujian province will bring about more exchanges and projects between Singapore and the Chinese city.

In a meeting with Fujian Party Secretary You Quan, PM Lee noted the developments in Xiamen since his last visit to the city.

“I was here 26 years ago and at that time, Xiamen was just beginning to open up and develop. Last night, driving in from the airport, I could not recognise the landscape. It  has completely changed,” he said.

"I was hoping to be able to visit Gulangyu (Gulang Island) again this time, which I did in the previous trip, but unfortunately, I would not have the chance. But we could see across the water and we see Zheng Chenggong's statue last night lit beautifully," said PM Lee, referring to the Ming dynasty loyalist who took control of Taiwan in 1662.

He told Mr You that he visited Zhongshan Road, the heartland of Xiamen’s commercial area, where he attended the unveiling ceremony of the restored OCBC building on Thursday morning. 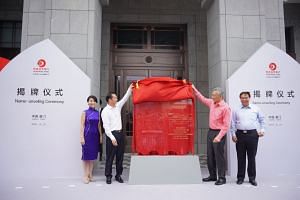 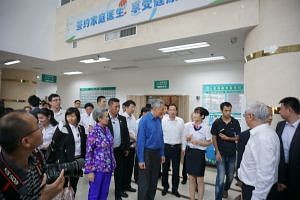 Mr Lee said he talked to some of the shopkeepers there to get a sense of the atmosphere. “There is a vibrancy and enthusiasm and entrepreneurship zeal which will generate a lot of progress and prosperity."

"I hope that my visit could stimulate interest in greater connection, greater exchanges and more projects and cooperation between Singapore and Xiamen," he added.

"I believe your visit this time will further the traditional relationship between China and Singapore as well as our close cooperation,'' he said.

Fujian has enjoyed rapid development in the past three decades after China's reform and opening up policy, and Xiamen was designated as one of China's four special economic zones at the time, Mr You said, adding that the province - where 80 per cent of its land area are mountainous - has improved its transportation system.

Finance Minister Heng Swee Keat, who is a member of the Singapore delegation, on Thursday shared on Facebook their tour of Zhongshan Pedestrian Street.

“I am meeting my counterpart, Chinese State Councillor and Minister of National Defence General Chang Wanquan to discuss practical ways to strengthen our defence relations,’’ he wrote on Facebook.

PM Lee and his delegation were in Xiamen on the second and final leg of his China visit.