He spoke on China's growing role in the international system, and the importance of its efforts to uphold openness and multilateralism.

Below is his full speech. The Chinese translation can be found on the Prime Minister's Office website here.

The theme of this year's Boao Forum, "An Open and Innovative Asia for a World of Greater Prosperity", is appropriate and timely. I thank President Xi for his keynote address and my fellow leaders for their insights and perspectives from each of their different positions on the shared issues that we all face.

Asia has outperformed the global economy because of openness. Individual economies have liberalised and opened up. Notably, China with its  liberalisation and opening up over 40 years. Others too, like India and the ASEAN countries in Southeast Asia, have pursued similar economic policies, and thrived. They have benefitted from an open, rules-based international order and a multilateral trading system. This has fostered economic cooperation within the region, and deepened interdependence between the Asian countries, the US, Europe and the rest of the world.

Asia's economic prospects are good. This year, the World Bank forecasts that East Asia and the Pacific will grow by 6.2 per cent. It is double the expected global growth of 3.1 per cent. But to sustain Asia's economic dynamism, countries have to remain open and connected to one another, and the multilateral WTO system must hold up as the basis for global trade and commerce. This cannot be taken for granted. To keep this international framework in good order, countries will have to adjust with the times. They must bring up to date their policies and international institutions to account for changes in the strategic and economic balance.

Perhaps the most far-reaching change thus far has been the rise of China. Since China joined the WTO in 2001, its weight in the global economy and its share of world trade have grown enormously. This has greatly benefitted China itself, and many other countries in the world, including Singapore. China's role in the international economy will grow larger. This has shifted the overall strategic balance. It has also raised expectations from other countries of what China should do - to liberalise its markets further, and contribute to the multilateral trading system.

Indeed, China itself recognises that it has been a major beneficiary of globalisation, and it will lose out if the existing multilateral, rules-based order falters. In Davos last year, President Xi Jinping laid out clearly China's approach and policies, upholding openness and multilateralism. The Asian Infrastructure Investment Bank (AIIB) and the Belt and Road (B&R) Initiative are two major efforts by China to contribute to the regional structure and regional prosperity. They aim to strengthen trade and investment ties, and enhance integration and interdependence. These are constructive, effective strategies for a growing China to integrate with the regional economy, and engage its neighbours through win-win cooperation. This is why Singapore was a founding member of the AIIB and a strong and early supporter of B&R. 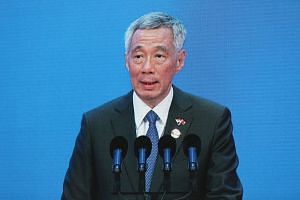 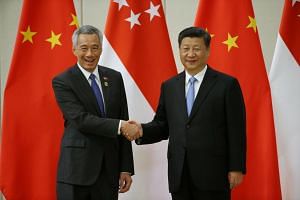 Since the Lianghui, the recent two meetings in Beijing, Chinese leaders and officials have declared China's determination to liberalise further. Today, I was very glad to hear President Xi reaffirm this, and announce further steps in financial sector reforms, in opening up foreign investment rules, in protecting intellectual property and increasing automobile imports. We look forward to seeing these strategies elaborated, implemented, and bearing fruit.

This is the broader context of the recent trade frictions between the US and China. The US has announced a series of unilateral tariffs on imports, many targeted at China. China has responded correspondingly, as it has to do. China's response has been careful and calibrated. Nevertheless, a serious dispute is now joined. Everyone still hopes that before these tariffs are implemented, the two countries will be able to work out an accommodation and head off further escalation.

Singapore does not believe that imposing unilateral tariffs is the correct solution. Unilateral measures are not compliant with WTO rules. Trade disputes should be resolved within the WTO framework. More fundamentally, as economists point out, the focus on the bilateral trade imbalance between the US and China is misplaced. What matters to a country is not its bilateral trade balance with a specific trading partner, but its overall trade balance with the rest of the world. Furthermore, the cause of a trade deficit is an imbalance in the domestic economy. In particular, a trade deficit happens when a country consumes more than it produces.

Nevertheless, we have to recognise that there is broad political support in the US for these measures. This is a change in the mood. What is it due to? Trade arrangements and concessions made in the past when China was only 5 per cent of the world's GDP are less readily accepted today, when China makes up 15 per cent of the world's GDP and is expected to grow this share even further. US companies that previously advocated for China when it joined the WTO in 2001, now feel disadvantaged. They perceive that the playing field is not level for all companies, in terms of market access or investment restrictions, especially in technology sectors. These pressures are not new, and have been building for some time.

A trade war between China and the US is still far from inevitable. But if one does happen, it will undermine the multilateral trading system which has underpinned global prosperity. Countries big and small will be affected.

It is reassuring that most Asia Pacific countries remain committed to multilateral trade and economic cooperation, for example through the Comprehensive and Progressive Agreement for Trans-Pacific Partnership (CPTPP) and the Regional Comprehensive Economic Partnership (RCEP) negotiations. These trade initiatives are important, but they will not compensate for the damage from a trade war, which will extend way beyond the economic loss that they cause.

China and the US have the most important bilateral relationship in the world. A trade war must damage these bilateral ties in many areas. Surely it will make it much harder for the two countries to cooperate on climate change, non-proliferation, regional security, and denuclearisation of the Korean Peninsula. None of these issues can be solved without the full participation of both countries. If the disputes escalate and destabilise US-China relations, the consequences for the world could be catastrophic.

There will always be competition between the major powers. But it makes all the difference whether competition takes place within a framework of interdependence, and generally accepted rules of the game. Because what is ultimately at stake is war and peace, the security and stability of the world.

In international affairs, one of China's strengths has always been its ability to take a strategic long-term view. It is in China's fundamental interests to contribute more to strengthening multilateralism, in keeping with its larger weight in the world. It is vital that China does so now, at this testing moment in international relations. I am confident that China will handle this challenge well, safeguard its own interests, and keep the global system open and inclusive. This will create an international environment that will enables China to attain its two centenary goals, and other countries to grow and prosper in a stable and peaceful world.