TOKYO (AFP) - Candidates in Japan made a last-ditch plea to voters on Saturday (Oct 21) on the last day of campaigning before an election expected to return Prime Minister Shinzo Abe to power with a comfortable majority.

Polls show Abe and his conservative Liberal Democratic Party (LDP) are clear favourites to win Sunday's election, handing him a fresh mandate for his hardline stance on North Korea and "Abenomics" growth strategy.

Abe's coalition is on track to win around 300 seats in the 465-seat lower house of parliament, according to a projection published by the Nikkei daily.

If the polls are correct, the 63-year-old Abe would be on course to be the longest-serving premier in post-war Japan, the world's third-biggest economy and key US ally in Asia.

The two main opposition parties - the "Party of Hope" created by the media-savvy Tokyo Governor Yuriko Koike and the new centre-left Constitutional Democratic Party - are seen winning around 50 seats each.

Abe shocked Japan this month by calling the election more than a year earlier than expected, citing twin "national crises" of an ageing population and hostility from North Korea. 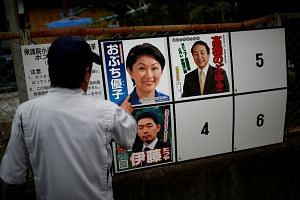 The regime in Pyongyang has threatened to "sink" Japan into the sea and fired two missiles over its northern island of Hokkaido in the space of a month.

Abe has stuck to a hawkish stance on North Korea, stressing that maximum pressure should be exerted on the regime and backing the US line that "all options" are on the table.

Throughout the short 12-day campaign, the premier has railed against Pyongyang, telling a crowd recently: "At a time like this... we cannot waver. Everyone, we must not yield to the threat of North Korea!" .

The other issue dominating the election has been the push to revive the once world-beating Japanese economy.

Abe says his trademark "Abenomics" strategy of ultra-loose monetary policy and big fiscal spending is the best way to pep up the economy, which is weighed down by debt and struggling with deflation.

He has also pledged to use part of the proceeds from a planned sales tax hike to fund free childcare in a bid to get more women into the workplace.

His opponent Koike wants to scrap the tax hike, arguing it would throttle a recovery that has seen Japan's longest stretch of growth in a decade.

But after a blaze of publicity when Koike created her new "Party of Hope", the bubble appears to have burst for the popular 65-year-old former newscaster, partly because she declined to run herself for prime minister.

"Every party has to have, to be credible, a candidate for prime minister and she would have been it but then she walked away and it is a ship that suddenly has no captain," Michael Cucek from Temple University told AFP.

Another brand-new party, the centre-left Constitutional Democrats, appears to have some momentum going into the poll and could do better than expected.

With little suspense over the overall outcome, the main tension is over whether Abe and his junior coalition partner Komeito will retain their two-thirds majority.

This is significant because it would enable Abe to propose changes to the US-imposed Constitution which effectively limits the military to a self-defence role and forces Japan to "renounce war."

One less predictable factor in the election is the weather as a typhoon barrels towards Japan, expected to dump heavy rains on most of the country on polling day.

This could weigh on turnout, with a lower participation rate seen as beneficial for Abe, whose supporters are more committed.