People on the go will soon be able to find a quiet place to sit down and tap away on a laptop, thanks to phonebooth-sized offices that will be popping up at train stations, airports and skyscraper lobbies.

An enclosure of just 1.2 sq m, the soundproof Telecube will have a seat, desk and power outlets.

Mitsubishi Estate, together with office furniture maker Okamura Corp video-conferencing software vendor V-Cube, and Telecube plan to install 1,000 of the boxes by 2023.

The companies are betting there will be enough demand for the mini workstations.

Coffee shops in Tokyo are often full of workers toiling away on laptops.

WeWork, which opened its first locations in Japan last year, also sees businesses and employees embracing more flexible working spaces in different locations that can be used only when needed.

"If you're on the way back from a sales visit and happen to have 15 minutes of free time at a train station, you may want to access a quick workplace," said Hiroyuki Mashita, Telecube's chief executive officer. 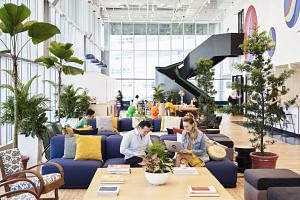 Shared offices up the ante

With rise in flexi-work, more choosing to set up home offices

Users will have to reserve the mini offices ahead of time, and unlock them using a QR code on smartphones.

The booth costs 250 yen (S$3.15) every 15 minutes, and corporate subscription plans charge a monthly rate for a fixed pool of hours.

The Japanese government is also encouraging workers to telecommute, in anticipation of congested transportation networks during the 2020 Tokyo Olympics, when 7.8 million spectators are forecast to visit, according to the organising committee.

Companies are also increasingly embracing telework, with 19 per cent of businesses with more than 100 employees saying they are adopting more flexible working arrangements, up from 16 per cent in 2008.

Mitsubishi and its partners have been testing 22 prototype Telecube boxes since November.

Four box-shaped offices, which look like phone booths, were installed last November inside the ticket gate at JR Shinagawa Station by East Japan Railway as a demonstration experiment.

Each of the so-called Station Booth facility is equipped with a desk, sofa, power outlet, free WiFi connection and heating, among other equipment.