TAIPEI (REUTERS) - With the Chinese Year of the Pig starting on Tuesday (Feb 5), pig lovers in Taiwan fear that a rush of people wanting to usher good fortune into their homes by getting a piglet as a pet may lead to a wave of abandoned pigs later on.

Ms Anita Chen, who runs a social media forum for pet pig owners and has two pig pets at her home in Taipei, said the first thing owners have to consider when raising pigs was freedom and flexibility.

Pigs like her "Xin-Xin" and "Mei-Mei" have the intelligence of a five-year-old child and can open everything from fridges to doors and drawers, often ripping out everything inside, to the horror of their homecoming owners.

"Piglets are very attached to people, they will constantly squeak to make you play with it or feed it," Ms Chen said, adding that many overwhelmed owners abandon their pet piglets in just a few months.

Visitors at a petting farm in the northern city of Taoyuan get a kick out feeding milk to piglets in a pen, and many want to take one home.

"We don't advise this as they are farm animals," said farm owner Yang San-guei.

Bama pigs, the species most commonly kept as pets in Taiwan, may be small and cute when they are young but they can grow to a hulking 60kg, Mr Yang said. 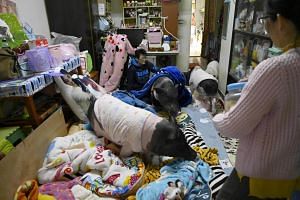 Bring home the bacon: A woman in Taiwan lives with four pet pigs

But if visitors won't be warned off, Mr Yang said he is willing to sell a piglet for NT$3,000 (S$132). The other little piggies go to market when they outgrow their pen.

Veterinarian Chang Chien-ming advised anyone thinking of getting a pig to do their research thoroughly to avoid nasty surprises.

"So that they know how big these pigs can grow and find an adequate veterinary hospital and educate themselves about the medical and nutritional aspects," he said.

He said he had seen renewed enthusiasm for pigs as pets over the past year.

Veterinary clinics willing to treat pigs are hard to find, Mr Chang said, with only one in 100 accepting pig patients.

Many owners also soon realise that having a porcine pet can seriously crimp their holiday plans, as pet hotels do not accept pigs.

Abandoned pigs in Taiwan have a harder time finding a new home than cats and dogs.

Publicly funded shelters don't accept pigs, as they are not classified as pets, leaving it to pet lovers or private shelters to take them in.