TOKYO (AFP) - More than 600,000 Japanese people over 40 are living in complete isolation from society, staying at home for more than six months without social interaction, the government estimated on Friday (March 29).

The phenomenon is so widespread in Japan it even has its own name - hikikomori - defined as someone who does not go to school or work for six months and does not interact with anyone outside their family during that time.

A government survey published on Friday estimated there were 613,000 hikikomori aged between 40 and 64, nearly three-quarters of whom were male.

"The number was bigger than we had imagined. Hikikomori isn't an issue only for younger people," a Cabinet Office official in charge of the survey told AFP.

Until recently, it was thought to be an issue mainly affecting teenagers and people in their 20s but ageing Japan is seeing a growing number of middle aged hikikomori cloistering themselves away for longer periods of time.

Around half of those included in the survey had been reclusive for more than seven years, the government said.

The figure is higher than the estimated number of hikikomori under the age of 39, thought to be around 541,000 according to a similar government survey published in 2016.

Many of the hikikomori are thought to be financially dependant on their ageing parents. 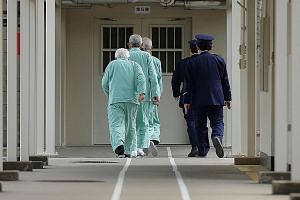 Elderly crime on the rise in greying Japan

Ms Rika Ueda, who works for a non-profit group that supports parents of hikikomori children, said she was not surprised by the survey.

"The government data backs our own survey showing there are many older hikikomori," Ms Ueda told AFP.

"But we were unaware that there are those in their 60s," she said. "It shows that Japanese society is tough to live in. Hikikomori people would rather stay at home without meeting anyone."

"I think the survey shows we have to ask ourselves what a happy life is to each of us," she said.