Multiple open letters have been signed by hundreds of anonymous civil servants in the past week condemning the administration of city leader Carrie Lam and the police.

A group of civil servants have also announced plans to hold a rally on Friday (Aug 2) night - something unheard of from a demographic that usually eschews politics.

The letters - accompanied by photos of civil servant identity cards with personal details obscured - bemoan Mrs Lam's lack of leadership and refusal to compromise as her administration grapples with huge protests rocking the international finance hub.

Civil servants interviewed by AFP said they felt compelled to speak out after nearly two months of chaos that shows no signs of abating, with Mrs Lam seemingly unable - or unwilling - to find a solution and Beijing continuing to back her government.

Many decided to break their silence after a vicious attack on protesters by pro-government thugs and suspected triad members that left 45 people in hospital.

"I hope to use this letter to tell citizens that the people are our real bosses," a 30-year-old executive officer and anonymous signatory who only gave her surname Leung, told AFP.

"We need to use this special role of ours to make sure the government squarely faces and responds to issues."

An officer in her mid-20s in the government's food and environmental hygiene department said she planned to attend Friday's rally because Mrs Lam's administration had not shown "a sliver of conscience". 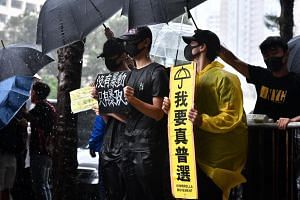 "If I don't speak up now, I would be complicit in their abuses," she told AFP.

"The current government has lost its credibility and used the violence of the system and the police to suppress people's voices and deprive them of their fundamental rights."

The Hong Kong protests were triggered by a government proposal which would have allowed extraditions to mainland China, but have since evolved into a call for wider democratic reforms and a halt to sliding freedoms.

Beyond agreeing to suspend the extradition Bill, there have been few other concessions from Mrs Lam, who has kept a low profile and made few public appearances as clashes between police and protesters have escalated.

The protest movement is reported to have broad support from within the city's legal, religious and business communities.

But growing numbers of professional groups are now speaking out, from architects to flight attendants.

One of the letters published online focused on allegations that the police were too slow to respond to the suspected triad attacks and colluded with the assailants who were filmed leaving the scene unhindered.

"As part of the disciplinary forces, we are extremely ashamed. You have brought shame upon your own shoulders," read a statement by a group of firefighters and paramedics condemning the police.

Chan, an employee in the government's innovation and technology bureau who asked that his first name not be revealed, said morale was low among his peers.

"It's very hard not to speculate that there's a connection between police and triads," he said, adding that the image of his profession had been "seriously damaged".

Police chiefs have forcefully denied allegations of collusion with triads, and said their officers were stretched thin by clashes with protests elsewhere that night.

Other letters penned by civil servants have taken aim at the government.

One described the authorities' actions as "extreme bullying and oppression", while another threatened "concrete industrial action, so that we could humbly join hands with the community at large".

The food department officer, who has attended protests in recent weeks, said her colleagues have had little chance to discuss politics at work.

"Civil servants need to remain politically neutral when carrying out their duties," she said.

"But when we take off our uniforms after work and become Hong Kong citizens again... like everyone else, we are anxious and angry with this shameless government."