OSAKA (AFP) - Special quick-flushing toilets, granny rap and a self-imposed brothel ban: Japan's Osaka is determined to paint itself in the best possible light for the Group of 20 leaders summit starting on Friday (June 28).

With a meaty agenda including global trade and geopolitical hotspots such as Iran and North Korea, the hosts are keen that world leaders are not caught short in the world-famous Japanese toilets.

They are showcasing the latest in toilet technology and have shaved down the time to refill the cistern from one minute to 20 seconds for the busy world leaders - also reducing the water usage with the environment part of the G-20 agenda.

Residents of Japan's second city are proud of their reputation for being straight-talking and having a wicked sense of humour, in contrast to the rest of the country which is often seen as shy, overly polite and cautious.

And to welcome the leaders, a local "idol" group of singers known as "Obachaaan" - whose members are women mostly in their 70s - released a rap video to showcase local attractions, delicacies and culture.

Restaurants in the area are offering dishes with G-20 themes. Certain restaurants are sprinkling takoyaki - a delicacy unique to Osaka that features fried pieces of chopped octopus in batter - with garnishes from G-20 nations: caviar for Russia and BBQ sauce for the United States, for example, in an effort to appeal to some of the estimated 30,000 officials and journalists from around the world.

Even sex workers have decided to do their bit, volunteering to close all the area's brothel doors for the first time since the 1989 funeral of Emperor Hirohito. 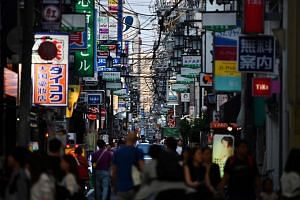 All 159 establishments in the traditional red-light district of Tobita-Shinchi will stay closed during the global event, in a bid to offer a squeaky clean G-20 image.

"We wanted to support the G-20 in our own way," said the head of the neighbourhood association, who asked not to be identified.

Showcasing Osaka's best face is in the city's long-term interest as it prepares to host the 2025 Expo as well as attempts to woo an international casino to the area, said the association chief.

"This may not bring a direct benefit to us. But if this somehow contributes to Osaka as a whole, it will bring benefits somewhere. I am sure of it," he said.

Business will close during the summit on Friday and Saturday but already, establishments have lowered the white drapes to avoid any visitors taking offence at what lies within.

As for the government, it is not leaving anything to chance, even with Japan virtually free of violent crime and mercifully spared some of the terrorist atrocities that have struck many nations in recent years.

Some 32,000 police officers along with 60 coastguard ships with more than 1,000 officers have been deployed to defend the region and the Intex Osaka venue on the island where G-20 leaders will meet.

Police frogmen have trawled the moats of Osaka Castle, part of which will remain closed during the summit. 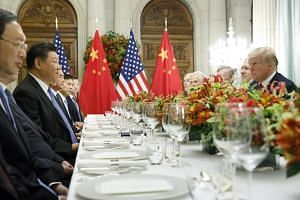 US and China agree tentative trade truce ahead of G-20 summit: Report

The authorities have blocked roads and warned of delays of "large-scale and long duration" during the summit, urging locals to shelve car use as much as possible to ease expected congestion.

Children can rejoice, as roughly 700 schools will be closed on Thursday and Friday.

Public transport is also curtailed, with lockers and bins sealed at train and subway stations as far away as Tokyo.

The authorities have banned any use of drones in the area and local courier services are already apologising in advance for expected delayed deliveries.

"This will be the biggest summit that Japan has ever hosted," Chief Cabinet Secretary Yoshihide Suga told local officials and security staff assigned to guard the Intex Osaka conference centre where G-20 leaders will meet.

"It is of paramount importance that we secure safety from both land and sea."