BEIJING (XINHUA) - About 18 per cent of Chinese youth play online video games at least four to five hours a day, showing signs of addiction, according to a survey.

According to a report in Monday's (July 2) China Youth Daily, research on the online behaviour of Chinese youth showed that 41.3 per cent of Chinese young people understand that it is unhealthy to spend too much time online, but cannot control themselves.

"Internet addiction is relevant to our lives. Almost one in every five youth has already been or is likely to become addicted to video games," said Zhou Huazhen, a scholar with the Chinese Academy of Social Sciences (CASS) in charge of the research.

Zhou said she believes the study has brought much more extensive and straightforward results in the study of Internet addiction in China than individual cases reported by the media.

The study showed that 23.6 per cent of Chinese young men played online video games at least four days a week, and 17.7 per cent played every day.

Older children need to use the Internet more often than younger children, both for study and daily life, as well as to meet their social needs, and teachers and parents usually loosen their supervision as children grow up, Zhou added. 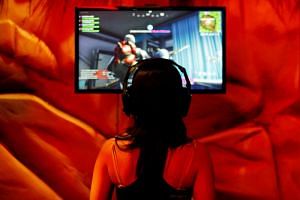 Zhang Shuhui, vice-president of CASS, conducted similar research in 2010, also working with Zhou, showing that only 6.7 per cent of students spent more than six hours online from Monday to Friday at that time.

Zhang said that even with minor differences in parameters between the surveys, the results of the two surveys show increasing Internet addiction among Chinese youth.

In the beginning of 2018, addiction to video games was recognised by the World Health Organisation as a mental health disorder.