TOKYO (REUTERS) – Thirty-three people were feared dead in an arson attack on a Japanese animation studio on Thursday (July 18), the authorities said, after a man was seen shouting “die” as he doused the building with fuel, in the nation’s worst mass killing in nearly two decades.

Prime Minister Shinzo Abe called the fire in the city of Kyoto – the latest grisly killing in a country known for its low crime rates – "too appalling for words” on Twitter and offered condolences to the victims’ families.

Police arrested a 41-year-old man who had shouted “die” as he poured what appeared to be petrol around the three-storey Kyoto Animation building shortly after 10am (9am Singapore time), public broadcaster NHK reported.

Twenty people were confirmed dead and more than 10 were showing no vital signs, an official for the Kyoto City Fire Department said, a term authorities often use before a death has been confirmed by a doctor.

White and black smoke billowed from the building’s charred windows, television footage showed. It was Japan’s worst mass killing since a suspected arson attack on a Tokyo building in 2001.

“I heard the sound of fire engines and stepped outside my house and saw big flames spewing out of the building,” NHK quoted a 16-year-old boy as saying.

“Fire department officials were trying to rescue the injured in a nearby park, but it seemed like there weren’t enough of them,” he said. 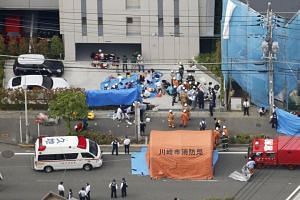 The prime minister said the cause was arson.

“Today, many people were killed and wounded in an arson murder case in Kyoto,” Abe said in a post on Twitter. “It is too appalling for words.”

Its Free! Road To The World – The Dream movie is due for release this month.

The 10 people without vital signs were found in the studio, some on third floor and others in a staircase leading up to the roof, a
fire official said.

Another 36 were injured, 10 of them seriously, the official said.

My thoughts and prayers to Kyoto Animation Studio and it’s workers who brought many of us pure joy, tears and unforgettable moments. May those artists get well soon. pic.twitter.com/MgPUAKqxjk

I have love for Kyoto Animation productions, even more so today. #京都アニメーション pic.twitter.com/udmWpAaXo6

The suspected arsonist was injured and was being treated in hospital, so police could not question him, NHK said. Kyoto police declined to comment.

There was an outpouring of support for the studio on Japanese-language social media, with some users posting pictures of animation.

Many posted with the hashtag “#PrayForKyoani” - using an abbreviation for Kyoto Animation.

Kyoto Animation, founded in 1981, has an outsized impact on Japan’s noted animation industry that outstrips a list of the works it has produced, said Tokyo-based film commentator Yuichi Maeda.

“It’s one of the best and largest animation firms in Japan, and with that loss of life, many of the best hands at animation in the nation are likely to be dead,” Maeda said, his voice shaking. “It’s too painful to contemplate.”

“It has a huge presence in animation here. To have this many people die at once will be a huge blow to the Japanese animation industry.”

Violent crime is relatively rare in Japan, but occasional high-profile incidents have shocked the country.

Less than two months ago, a knife-wielding man slashed at a group of schoolgirls at a bus stop in Kawasaki, just south of Tokyo, killing one girl and the father of another, while injuring more than a dozen children.

In 2016, a man armed with a knife broke into a facility for the disabled in a small town near Tokyo and killed 19 patients.