“The northern nuclear test ground of the DPRK (Democratic People’s Republic of Korea) will be dismantled to transparently guarantee the discontinuance of the nuclear test,” the KCNA said after Mr Kim convened this year’s first plenary session of the Central Committee of the ruling Worker’s Party on Friday.

"As the weaponisation of nuclear weapons has been verified, it is not necessary for us to conduct any more nuclear tests or test launches of mid- and long range missiles or ICBMs," Mr Kim told the meeting.

"The northern nuclear test site has completed its mission," he added.

“We will concentrate all efforts on building a powerful socialist economy and markedly improving the standard of people’s living through the mobilisation of all human and material resources of the country,” he said.

His announcement came just days Kim’s planned summit with South Korean President Moon Jae In next week and a meeting with US President Donald Trump in late May or early June.

It was the second time in two days that he made what appeared to be a significant concession to the United States but in reality cemented the status quo.

North Korea already had stopped testing its weapons.  Mr Kim made no mention in his latest remarks of dismantling the nuclear weapons and long-range missiles North
Korea has already built. On the contrary, he suggested he was going to keep them.

Still, Mr Trump welcomed what Mr Kim said. “This is very good news for North Korea and the World – big progress! Look forward to our Summit,” the president said in a Twitter message.

Mr Moon’s office also praised the announcement. “We view the North’s decision as a significant step toward the denuclearisation of the Korean Peninsula the world has wished for,” said Yoon Young-chan, a spokesman for Mr Moon.

On Thursday, Mr Moon said Mr Kim had made a similar gesture, saying the North no longer insisted on the withdrawal of American troops from the Korean Peninsula. But White House officials privately dismissed the remarks, saying removal of the troops was never on the table.

Caution towards Mr Kim’s peace overtures also punctuated the reaction of officials from Japan, which North Korea has long threatened with missile strikes. The defence minister, Itsunori Onodera, said the move was “not sufficient” because it did not clearly state whether the suspension included the short and midrange missiles that could hit Japan.

Analysts in the region are divided over Mr Kim’s motives. Some argue that Mr Kim just wanted to use negotiations to buy time and ease international sanctions. But others say Mr Kim would eventually give up his nuclear arsenal if he were provided with the right incentives, such as security guarantees, normalized ties with Washington and economic aid.

North Korea also said that to create an “international environment favourable” for its economy, it would “facilitate close contact and active dialogue” with neighbouring countries and the international community.

Pyongyang has made rapid technological progress in its weapons programmes under Kim, which has seen it subjected to increasingly strict sanctions by the UN Security Council, US, EU, South Korea and others.

Last year it carried out its sixth nuclear test, by far its most powerful to date, and launched missiles capable of reaching mainland United States. 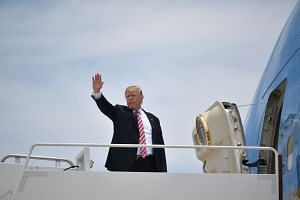 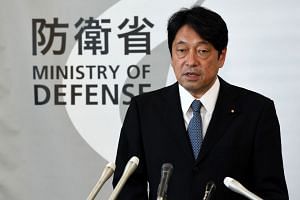 It emerged this week that Trump’s CIA chief had recently met the reclusive North Korean leader, significantly boosting the odds of the Trump-Kim summit going ahead in late May or early June.

North Korea has defended its nuclear and missile programmes as necessary deterrents against perceived US hostility. It has conducted numerous missile tests, and last year it detonated its most powerful nuclear bomb.

The tests and escalating rhetoric between Trump and Kim raised fears of war until, in a New Year’s speech, the North Korean leader called for reduced military tensions and improved ties with South Korea and sent a delegation to the Winter Olympics in the South in February.

Nam Sung Wook, professor of North Korean Studies at Korea University in Seoul, said it could be considered “sensational” that Kim Jong Un personally declared plans to suspend nuclear development, but his remarks left a number of questions.

“It still does not seem clear if it means whether the North will just not pursue further development of its nuclear programmes in the future, or whether they will completely shut down ‘all’ nuclear facilities. And what are they going to do with their existing nuclear weapons,” Nam said.

North Korea has expressed its commitment to “complete denuclearisation” of the Korean peninsula and has not attached conditions, South Korea’s Moon said on Thursday, but Washington has remained wary and vowed to maintain “maximum pressure” on Pyongyang.

The United States said on Thursday that in the run-up to Trump’s planned summit with Kim countries should continue to put financial and diplomatic pressure on Pyongyang to surrender its banned nuclear weapons.  UN Security Council sanctions imposed on North Korea after its first nuclear test in 2006 and extended over the past decade have aimed to deny North Korea a considerable amount of international trade.