WASHINGTON (AFP) - A top US admiral said on Wednesday (April 26) that America wants to bring North Korean leader Kim Jong Un to "his senses", as senators attended an extraordinary briefing at the White House.

Admiral Harry Harris, who heads the Pacific Command, welcomed recent efforts by Beijing to try to defuse soaring tensions between Pyongyang and Washington, and suggested a non-military solution remained the preferred outcome.

"In confronting the reckless North Korean regime, it's critical that we're guided by a strong sense of resolve, both privately and publicly, both diplomatically and militarily," Harris said.

"All options are on the table. We want to bring Kim Jong Un to his senses, not to his knees."

Meanwhile, all 100 senators filed onto charter buses for a short ride to the White House, after being summoned to receive a classified briefing on North Korea and its nuclear weapons programme. The executive mansion is an extremely rare venue for such an event. 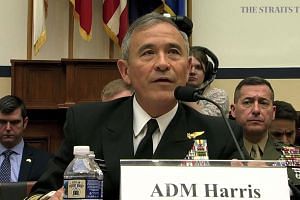 US may need to strengthen defences against North Korea threat, says admiral 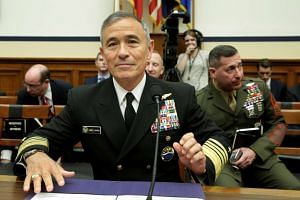 'All on me:' US admiral takes blame in carrier to North Korea fiasco

The briefing, due to start at 1900 GMT, was being led by Pentagon chief Jim Mattis, Secretary of State Rex Tillerson, Director of National Intelligence Dan Coats and General Joe Dunford, who is America's top officer and chairman of the Joint Chiefs of Staff. 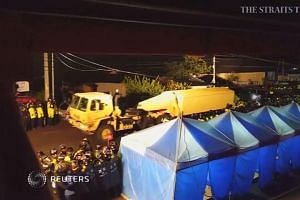 "This shows how serious this is," Republican Senator Lindsey Graham said.

"We should go to the home of the commander-in-chief. This lets the Congress know this is a very big deal."

The Terminal High Altitude Area Defense (Thaad) system is being set up on a former golf course in the southern county of Seongju, and its arrival was met by hundreds of protesters, some of whom clashed with police.

Harris said the Thaad system "will be operational in the coming days, and able to better defend South Korea against the growing North Korean threat." But China fears Thaad will weaken its own ballistic capabilities and says it upsets the regional security balance.

"It helps in no way to achieve the denuclearisation of the peninsula and regional peace and stability," he said, adding China would "take necessary measures to safeguard its own interests."

Thaad is designed to intercept and destroy short and medium-range ballistic missiles during their final phase of flight.

Harris said the Pentagon should weigh whether to install missile interceptors on Hawaii, which could be one of the first parts of the United States in range of an improved North Korean missile.

The United States already has missile interceptors in California and Alaska that can supposedly stop any ballistic threat coming over the Pacific, but Harris said these systems need strengthening.

The latest move comes as tension soars on the Korean peninsula following a series of missile launches by the North and warnings from the administration of US President Donald Trump that military action was an "option on the table."

Still, Pentagon officials have stressed to Trump there are no easy options for military interventions in North Korea.

Washington has deployed an aircraft carrier strike group to the peninsula in a show of force, amid signs the North could be preparing for a sixth nuclear test.

The deployment drew widespread derision after it emerged that instead of steaming toward the peninsula, the ships actually headed in the opposite direction for a few days to train with the Australian navy.

"That's my fault on the confusion and I'll take the hit for it," Harris said.

"Where I failed was to communicate that adequately to the press and the media, so that is all on me."

Harris said the USS Carl Vinson strike group is now in the Philippine Sea just east of Okinawa, "in striking range and power projection range of North Korea if called upon to do that."

The drill saw more than 300 large-calibre self-propelled guns firing simultaneously and torpedo attacks by submarines, state-run KCNA said, demonstrating North Korea's determination to pour a "merciless rain of fire on the reckless imperialist US and its dirty followers."

Seoul held a large annual drill of its own Wednesday, involving some 100 artillery pieces, 90 armoured vehicles and 50 aircraft, as well as 2,000 South Korean and US troops, the defence ministry said.