SEOUL - North Korea's media intensified its demands on Monday (July 23) for South Korea to implement its summit agreement to work towards declaring an end to the Korean War, calling it a "historic task" that cannot be delayed anymore, Yonhap news agency reported.

South Korean President Moon Jae-in and North Korean leader Kim Jong Un agreed in their April 27 summit to formally end the 1950-53 Korean War this year, replacing the armistice that halted the hostilities with a peace treaty for permanent peace on the Korean Peninsula.

"Given that the South Korean government also has an obligation to carry out what was agreed upon in the Panmunjom Declaration, it should not sit idle on the issue of declaring an end to the war," said Uriminzokkiri, the North's external propaganda website, in English, referring to the April summit agreement.

"It is a historic task that cannot be delayed anymore to build solid peace regime by ending the current abnormal state of armistice on the Korean Peninsula," it added, according to Yonhap.

Meari, another North Korean propaganda website, also urged the Seoul government to "do its part" in working towards a declaration of an end to the Korean War.

It added that the inter-Korean summit agreement reached in April will lose its meaning if the South Korean government does not act.

Observers say the North Korean media reports signal Pyongyang's displeasure with what it sees as a slow pace at which the debate on formally ending the war has been under way. 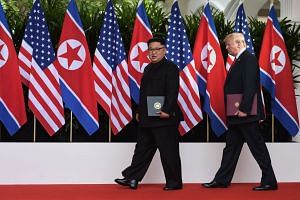 US struggling to convert North Korea promises into progress: Experts

North Korea denuclearisation in a year not likely: US intelligence chief Dan Coats

In a statement issued right after US Secretary of State Mike Pompeo left Pyongyang following his trip there early this month, the North's foreign ministry lashed out at Washington for making insufficient efforts to build permanent peace on the Korean Peninsula.

"The US side never mentioned the issue of establishing a peace regime on the Korean peninsula which is essential for defusing tension and preventing a war," the ministry said.

"It took the position that it would even backtrack on the issue it had agreed on to end the status of war under certain conditions and excuses."