Mr Kim made the on-site inspections of two textile plants located in Sinuiju, accompanied by senior officials of the ruling Workers' Party of Korea, according to the Korean Central News Agency (KCNA).

On his trip to the Sinuiju Textile Mill built in the late 1950s, Mr Kim said that the factory has contributed to propping up the country's light industry for decades but expressed displeasure that its workers have not lived up to such a "proud tradition", Yonhap news agency said.

Mr Kim pointed out that the workers are just complaining about lack of money and materials, not focusing on normalising and modernising its facilities. He urged them to step up their productivity, the KCNA said.

When he visited another textile plant in the region, Mr Kim lashed out at workers for failing to repair their buildings, saying they are trying to operate "precious" facilities under conditions that are like a "stable".

This marked the third day in a row that the North Korean media has reported on Mr Kim's on-site inspections. 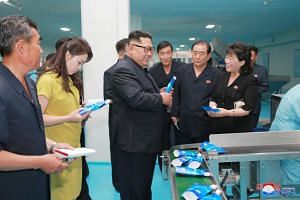 On Sunday, the KCNA said that Mr Kim had toured a cosmetics factory in Sinuiju, accompanied by his wife, Ri Sol Ju, and other senior officials.

On Saturday, he visited a reed farm in Sindo county, also on the Sino-North Korea border.

Sinuiju, a border town near China, was designated as a special economic zone by his father, Kim Jong Il, back in 2002.

Mr Kim's recent trips come in line with his stepped-up push for economic cooperation with China. He visited Beijing in June, which also included his tours of major industrial facilities.