South Korea's military said on Wednesday that two ballistic missiles had been fired from the Wonsan area on North Korea's east coast.

Mr Kim "repeatedly expressed satisfaction over the result of the test-fire" and "highly appreciated" the national defence science and munitions industry personnel who have "made another wonderful Korean-style multiple launch rocket system", KCNA said.

While there was little further detail on the weapons, the guided rockets "will play a main role in ground military operations", KCNA said.

The North is banned from ballistic missile launches under UN Security Council resolutions, but Wednesday's firings were the second in less than a week, despite a meeting between Mr Kim and US President Donald Trump last month.

Pyongyang and Washington are engaged in a long-running diplomatic process over the North's nuclear and missile programmes that has seen three high-profile encounters between their leaders in the space of a year. 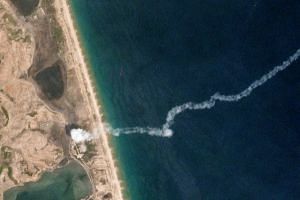 Pyongyang has warned that further negotiations could be derailed by Washington and Seoul's refusal to scrap the annual military manoeuvres between their forces.