WASHINGTON (AFP) - North Korean defector Ji Seong Ho in January raised his crutches triumphantly during President Donald Trump's State of the Union address, symbolising his journey from near starvation to a place of honour in the US Capitol.

On Tuesday (Oct 9), Mr Ji was back in Washington, this time in an office building several blocks from the White House, where he had a message for Mr Trump: Make any declaration negotiated in his burgeoning relationship with North Korean leader Kim Jong Un contingent on human rights.

"Why can't we talk about human rights at the same time? We know they want something. Well, let's ask them for something that we want," he said.

Secretary of State Mike Pompeo, who met Mr Kim on Sunday during his fourth visit to Pyongyang, told reporters on Tuesday that his trip had made "real progress" in the goal of "the full and final verified denuclearisation of North Korea".

Mr Trump has hinted that he is ready to declare an end to war with Pyongyang, formally closing the 1950-53 conflict that resulted in an armistice rather than a formal treaty.

Mr Trump met Mr Kim in June in Singapore - the first-ever summit between the two countries - and said on Tuesday that he had narrowed down the number of possible locations for a second meeting to three or four. 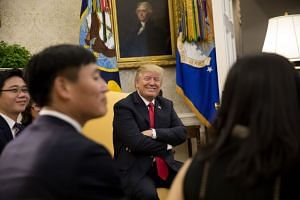 The real estate mogul turned president has declared himself "in love" with Mr Kim, and cast his sudden, rapid diplomatic push as a signature foreign policy achievement, saying he has kept Americans safe, as Pyongyang has held off on further nuclear and missile tests.

For Mr Kim, an official end to the war and subsequent peace treaty would provide coveted international recognition and security guarantees for North Korea, ruled by three generations of his family with an iron fist.

Mr Ji made an improbable escape from North Korea, widely seen as one of the most repressive regimes in the world, while hobbling on wooden crutches.

He fell off a train while stealing coal to barter for food during the devastating famine in the 1990s and had his left arm and left leg amputated without anesthesia. He was fitted with prosthetic limbs after escaping to South Korea.

Mr Ji was joined at the news conference by Mr Kang Chol Hwan, who was jailed for a decade from the age of nine after the totalitarian state accused his grandfather of treason.

"The North Korean economy is on the verge of collapse and they wouldn't have a lot of choice if the US and South Korea dictated certain terms," Mr Kang said.

"The reverse is what is happening. North Korea is dictating the terms and apparently the US and South Korea are being deceived by the North Korean leader and his regime."

A landmark United Nations Commission of Inquiry released in 2014 found that North Korea was imprisoning 80,000 to 120,000 political prisoners in four large camps, with inmates deliberately starved as a means of control.

While the United States still lists human rights concerns in regular reports, the Trump administration says its negotiations with North Korea are focused squarely on its nuclear and missile capabilities.

"If you want to give a gift of a declaration of the end of war, then I ask that you ask Kim Jong Un in exchange to dismantle all of the gulags in North Korea. That would be fair."