The 40-minute broadcast by Korean Central Television seized the chance to heap praise on Kim, showing footage of his night-time stroll on the Singapore waterfront and saying he was welcomed with "deep respect and boundless enthusiasm" in the city state.

"Singapore, a beautiful and developed city, has become all the more famous because of the meeting of the century," the female voiceover reported.

"The streets were crowded with well-wishers who were full of reverence for Chairman Kim, who has come to lead world politics with his extraordinary political acumen," she said.

Kim was "warmly welcomed" by crowds "wherever he appeared", according to the voiceover, as the footage cut to a scene of Kim strolling through the Gardens by the Bay accompanied by Singapore Foreign Minister Vivian Balakrishnan, as crowds strained to take smartphone pictures.

"The meeting of the century awaited by the whole world finally took place" on Tuesday, the voiceover said to shots of Kim's long motorcade en route to the summit venue on Sentosa island.

"Who could have imagined that the two leaders meet and take a big first step towards reconciliation?" 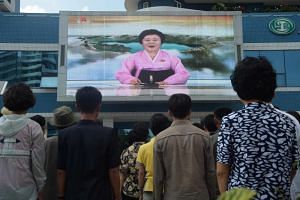 The footage showcased scenes spanning the hugely anticipated day, including Kim and Trump's first handshake in front of their national flags.

The broadcast also showed the pair sitting down for talks, sharing a working lunch, signing a joint statement and Trump showing Kim his armoured limousine, nicknamed the "Beast".

The video ended with Kim returning home to a red carpet hero's welcome, complete with honour guards and crowds of hysterical well-wishers cheering and waving flags at Pyongyang airport.

"The whole country heartily welcomed home the prominent world leader, revered by all the people under the heaven," it concluded.

North Korea's tightly controlled state media has enthusiastically reported the summit as a great achievement for the country, which remains isolated and heavily sanctioned.

The official KCNA news agency ran a glowing dispatch, describing it as an "epoch-making meeting" that would help foster "a radical switchover in the most hostile (North Korea)-US relations".

And the North's ruling Workers Party official daily Rodong Sinmun splashed no fewer than 33 pictures across four of its usual six pages.

In Pyongyang, commuters crowded round the spread of images, for most of them the first they had seen of the summit.