SEOUL (AFP) – North Korea said on Friday (Nov 16)  it had expelled a US citizen who tried to enter illegally, an unusually swift resolution of a case that could have further complicated reconciliation moves between the two countries.

The man, identified as Lawrence Bruce Byron, had been in custody after crossing into North Korea from China on Oct 16, the official Korean Central News Agency said.

“While being questioned, he said he had illegally entered the country under the command of the US Central Intelligence Agency,” KCNA said.

“Relevant authorities have decided to expel him from the country.”

A man with the same name was arrested in South Korea while trying to sneak over the inter-Korean border in November last year.

Byron, who is in his late 50s and from Louisiana, was later deported back to the United States.

Secretary of State Mike Pompeo, who has travelled four times this year to Pyongyang on his diplomatic drive, sounded relieved at the quick resolution of the case.

“The United States appreciates the cooperation of the Democratic People’s Republic of Korea and the embassy of Sweden in facilitating the release of an American citizen,” Pompeo said, using the North’s official name.

Sweden represents US interests in North Korea in the absence of diplomatic relations.

“The United States is grateful for the sustained support of Sweden, our protecting power in North Korea, for its advocacy on behalf of American citizens,” Pompeo said.

Media reports said that Bryon told South Korean officials he sought to facilitate talks between North Korea and the United States, although he is a private citizen.

It is rare for North Korea to release an American detainee so swiftly. 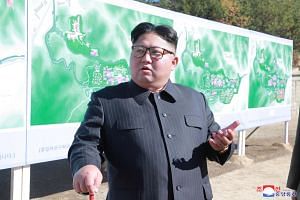 “This gesture means the North wants to keep up momentum for dialogue with the US,” professor Yang Moo-Jin at the University of North Korean Studies told AFP.

From journalists to missionaries, most Americans held by North Korea have been released after high-profile interventions.

The reclusive regime freed three US detainees in May in an apparent goodwill gesture before a summit between North Korean leader Kim Jong Un and US President Donald Trump in Singapore.

The three men travelled home with Pompeo and were greeted by Trump on their arrival at an air base near Washington.

There are no known US detainees still held by the rigid communist state. Washington last year banned its citizens from traveling to North Korea without special permission, the only country for which such a restriction exists.

The latest release also came after fresh allegations emerged last month that Otto Warmbier, a US student who died after being held in the North, was tortured in custody.

The 22-year-old was jailed in the North for more than a year and was released in a comatose state in 2017 but died shortly after returning home.

A recent US media report said there was new evidence that he was beaten by the regime, allegations denied by the regime, which says he contracted botulism in detention.

At their historic Singapore summit, Trump and Kim signed a vaguely worded document on denuclearisation of the peninsula.

Progress has since stalled as Washington and Pyongyang spar over the meaning of the document.

KCNA, meanwhile, reported that Kim had overseen the testing of a “newly developed ultramodern tactical weapon.” It marked the first official report of a weapons test by North Korea since it began the delicate diplomatic process with Washington.

The US State Department played down the announcement, saying it was “confident” that the negotiation process remained on track with North Korea.