The move could change the course of the stalled nuclear negotiations between leader Kim Jong Un and United States President Donald Trump.

The move, which is yet to be verified by the North's state media, is likely to be confirmed to resident diplomats at an event scheduled for Jan 23 in Pyongyang, NK News reported separately.

The apparent replacement of the top diplomat comes days after the isolated nation publicly declared that it wouldn't rely on its leader's personal relationship with Mr Trump, as it doesn't intend to trade its nuclear weapons for a halt in sanctions.

"There will never be such negotiations as that in Vietnam, in which we proposed exchanging a core nuclear facility of the country for the lifting of some United Nations sanctions," the state-run Korean Central News Agency cited the foreign minister's adviser Kim Kye Gwan as saying earlier this month.

"There is no need for us to be present in such talks, in which there is only unilateral pressure."

Since the failure of the first-in-eight-months working-level denuclearisation talks in October in Stockholm, Pyongyang hasn't responded to Washington's continued demands for another talk and instead stepped up tensions verbally and with weapons tests.

Most recently, it said late last year that it successfully conducted a "crucial" test at a long-range projectile launch site and had boosted its nuclear-deterrent capabilities, without elaborating on details.

Mr Kim declared in a speech at the start of the year that a lack of US response in nuclear talks meant he was no longer bound by his pledge to halt major missile tests and would soon debut a "new strategic weapon".

Declining to go into detail, Mr Kim also left the outside world guessing what "new path" he will take, and how he will deal with the US in 2020.

The replacement of Mr Ri also coincides with Seoul's sudden turn to warm inter-Korean ties as the Kim-Trump talks for denuclearisation remain in deadlock and rising cracks in South Korea's relations with the US.

South Korean President Moon Jae-in said in a New Year news conference that he will help on projects such as individual tourism with North Korea if they require approval from the UN to exempt them from sanctions.

His Unification Ministry later said that the government is considering allowing South Korean individuals to travel to North Korea to expand inter-Korean exchanges in the private sector.

US Ambassador to South Korea Harry Harris said such a push by Seoul should be discussed with the US.

His comment was immediately denounced by Mr Moon's office as "very inappropriate".

Mr Ri Son Gwon is well-known among South Koreans after he led a North Korean delegation for the first high-level inter-Korean talks in more than two years in January 2018. 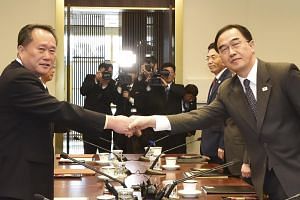 Mr Ri impressed South Koreans with his relaxed attitude and blunt speaking. He took a swipe at South Korean media and became a household name for his so-called "nangmyeon" comment on South Korean tycoons in September 2018.

At a luncheon with a group of South Korean conglomerate chiefs, who were visiting Pyongyang as part of Mr Moon's delegation for a summit with Mr Kim, Mr Ri scolded how they could be gobbling up the cold noodle "nangmyeon" in that situation, a comment which appeared as a rebuke against the tycoons not taking enough action to boost inter-Korean businesses development.

Mr Ri served as a senior colonel in 2010 and last appeared in the North's state media when the KCNA reported in April that he was elected as a member of the Foreign Affairs Committee along with Mr Choe Son Hui, first vice-minister of foreign affairs.

He previously also led a working-level military dialogue between the two Koreas in 2011.

The outgoing minister, Mr Ri Yong Ho, served as the top diplomat for four years since 2016.