The North Korea-related analysis website described the test site as "primed and ready."

A barrage of recent North Korean missile tests has stoked US fears that Pyongyang may soon develop an intercontinental ballistic missile capable of delivering a nuclear warhead to the US mainland.

There is speculation that the country could be preparing a missile launch, or even another nuclear test - this would be its sixth - to mark the 105th birthday anniversary of its founder Kim Il Sung on Saturday. 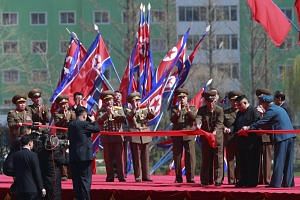 The Voice of America said on Wednesday night, quoting US government and other sources, that North Korea "has apparently placed a nuclear device in a tunnel and it could be detonated on Saturday am Korea time."

President Donald Trump's administration has been forceful in its warnings to Pyongyang that leave military options "on the table," as Secretary of State Rex Tillerson has said.

The threat carries extra weight after the US strike on a Syrian air base last week.

"We are sending an armada. Very powerful," Trump said on Wednesday. "We have submarines. Very powerful. Far more powerful than the aircraft carrier."

He was referring to a strike group headed by the USS Carl Vinson supercarrier that has been re-routed to the Korean peninsula in a show of force against Kim.

The strike group, which deployed with about 6,500 sailors, is still some way south, conducting exercises with the Australian navy.

The US Navy already has a massive regional presence, including another carrier strike group headquartered at Yokosuka in Japan.