Trump met with North Korean leader Kim Jong Un in Singapore on June 12, where the US said Kim had agreed to totally get rid of his nuclear weapons.

After the historic summit, Trump tweeted that “there is no longer a Nuclear Threat from North Korea,” but in recent days he has faced criticism about the lack of clear progress towards denuclearisation.

Pompeo insisted that “progress is happening” and that Trump is “upbeat about the prospects of North Korean denuclearisation.”

The top US diplomat said Trump “would agree that the primary systems that have threatened America continue to exist.”

“I think what his comment was that the tension had been greatly reduced,” Pompeo said.

Still, he warned, Washington will not let nuclear negotiations with Pyongyang continue indefinitely.

“We are engaged in patient diplomacy, but we will not let this drag out to no end,” Pompeo said. 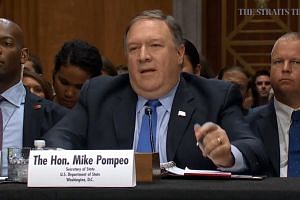 Under fire in Congress, US Secretary of State Pompeo defends Trump's summit with Putin

Pompeo said he had emphasised this position during “productive” discussions he’d had with Kim Yong Chol, Kim’s powerful right-hand man.

“Progress is happening. We need Chairman Kim Jong Un to follow through on his commitments made in Singapore.”

In a sign of potential progress, new satellite imagery shows that Kim has started dismantling a facility seen as a testing ground for intercontinental ballistic missiles.

Pompeo added that “every single nation” must maintain enforcement of US sanctions against North Korea.

China and Russia have argued that North Korea should be rewarded with the prospect of eased sanctions for opening up dialogue with the United States and halting missile tests.

When asked if North Korea is still advancing its nuclear programme, Pompeo demurred.

“May I answer that question in a different setting?” he said, referring to a closed-door meeting with senators where classified information can be discussed.