SEOUL - North Korea intensified its demand for the resumption of two inter-Korean economic projects on Tuesday (July 31), expressing displeasure with what it sees as slow-paced progress in cooperation between the two Koreas, Yonhap news agency reported.

In a commentary, the Rodong Sinmun, the newspaper of the Workers' Party of Korea, criticised South Korea for using global sanctions as an excuse to drag its feet in fostering cross-border cooperation.

"Although the owner of Cheong Wa Dae (South Korea's presidential office) changed, it does not muster up its courage to utter any measures with regard to the shutdown of the Kaesong industrial park and the suspension of the Mount Kumgang tour programme, things that the previous conservative governments left behind," the newspaper said.

"It is rather adding more to the list of sanctions and pressure by jumping on the bandwagon of foreign powers."

In 2016, South Korea decided to abruptly halt the operation of a joint industrial complex in the North's border town of Kaesong in retaliation for Pyongyang's missile and nuclear provocations.

The industrial park was regarded as a major inter-Korean cooperative project, along with a tour programme at Kumgangsan on the North's east coast, which was also suspended in July 2008 after a female South Korean tourist was shot dead by a North Korean guard near the resort.

The newspaper, in particular, said that the Seoul government did not consult anybody before making a unilateral decision to close the Kaesong park and added that the move does not have anything to do with sanctions, Yonhap reported.

"The same is true for the issue of the resumption of the Mount Kumgang tour programme," it said. "What on earth does it have to do with sanctions from outside to see the views of our famous mountain?"

The North has increased its calls for South Korea to speed up its cross-border exchanges in an apparent frustration with the current pace at which progress has been made.

Since their historic summit in April, a flurry of working-level talks between the two Koreas have been held to coordinate cooperation in diverse areas, including roads, railways, forestry and sports.

South Korea, however, has not been able to actively engage North Korea, especially on the economic front, for fear it could violate multilayered sanctions imposed on Pyongyang for its nuclear and missile programmes. 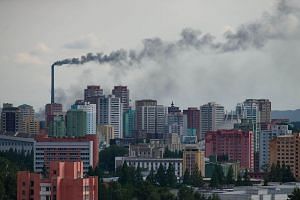 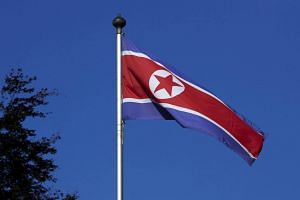 The newspaper voiced disappointment that all those efforts have stopped short of being translated into substantive progress in relations.

The North's renewed call for resumption of the two major projects came days after the Seoul government rejected a request by 153 people who operated businesses in Kaesong to visit the North's border town.

Washington remains firm that there will be no sanctions relief until the North completely gives up its nuclear weapons programme.

Last week, Mark Lambert, the State Department's Korea desk director and acting deputy assistant secretary, held a meeting in Seoul with a dozen South Koreans who used to do business in North Korea and reportedly said that the US is ready to support cross-border exchanges in case Pyongyang demonstrates its will for denuclearisation.

His remarks were interpreted as reaffirming Washington's stance that full-blown economic cooperation with the North can take place only when the North completely gives up its nuclear weapons programme.

According to Yonhap, the website mentioned the Seoul government's recent affirmation that it will closely cooperate with the international community to put sanctions in place against the North following a report that the North's coal was found to have been shipped to the South.

"The inappropriate act by the South Korean authorities to promote its complete implementation of sanctions against North Korea is drawing an outcry from all people," the website said.

"Like water and fire cannot go together, the thought that sanctions and dialogue can go hand in hand does not make sense," it added.

"We cannot expect genuine improvement in inter-Korean relations as long as the South Korean authorities adhere to the old-fashioned sanctions and pressure scheme influenced by outside forces."