SEOUL - North Korea fired several “short-range projectiles” from its eastern coast yesterday, in what was seen as a sign of growing impatience over deadlocked nuclear talks with the United States.

The projectiles, which some experts said could be from a multiple launch rocket system and not ballistic missiles, flew 70km to 200km before landing in the sea yesterday morning.

As speculation mounted that the move  signalled  a breach in Pyongyang’s self-imposed moratorium on missile testing, US President Donald Trump expressed confidence that North Korean leader Kim Jong Un would not “break his promise.”

Mr Trump tweeted last night: “Anything in this very interesting world is possible, but I believe that Kim Jong Un fully realises the great economic potential of North Korea, & will do nothing to interfere or end it.

“He also knows that I am with him & does not want to break his promise to me. Deal will happen!”

The projectiles, though, were enough to rattle South Korea.

The presidential Blue House in Seoul, after convening a national security meeting, called on Pyongyang to “stop acts that could escalate military tension on the Korean peninsula”. 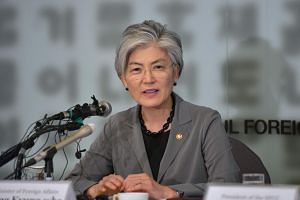 Presidential spokesman Ko Min-jung said the government was “very concerned that North Korea’s actions were against the spirit of the Sept 19 military agreement” to cease all hostile acts and urged the Pyongyang regime to resume dialogue with the US at an early date.

The South Korean military was closely monitoring the North’s movements and maintaining a full-fledged posture in close coordination with the US, said the Joint Chiefs of Staff.

US Secretary of State Mike Pompeo, meanwhile, said that he had spoken to his counterparts in Japan and South Korea by phone.

North Korea last conducted a ballistic missile test in November 2017, firing the Hwasong-15 which it claimed was capable of striking the US mainland.

The Pyongyang regime then embarked on a charm offensive to seek a dialogue with the US which culminated in two summits between Mr Kim and Mr Trump in Singapore last year and in Hanoi in February.

The talks in the Vietnamese capital collapsed after Mr Trump walked away from Mr Kim’s offer to dismantle the main North Korean nuclear facility in Yongbyon in return for the lifting of five major sanctions.

Pyongyang has since ramped up the pressure with a series of military moves, which included Mr Kim inspecting an air force drill last month which was followed a day later by the testing of a tactical guided weapon and the projectile launch yesterday.

A missile test could be deemed a violation of Pyongyang’s self-imposed moratorium on testing, but North Korea watcher Ankit Panda, an adjunct senior fellow at the Federation of American Scientists, noted on Twitter that the moratorium “only applies to inter-continental-range ballistic missiles”.

Other experts were less optimistic about the fallout from the latest North Korean test, warning that the move could allow hardliners in the US to gain wider support in pushing for sanctions instead of dialogue.

“Amid a worsening food shortage  and sanctions still in place, North Korea’s action inevitably emits the appearance that it is impatient,” Dr Lee Seong-hyon of the Sejong Institute think-tank told The Straits Times.

“But this will be seen as a sign by hardliners that sanctions are working and we should stick to tough sanctions to persuade North Korea to renounce nukes,” he added. 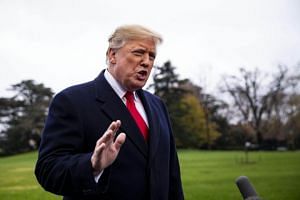 North Korea has no economic future if it has nuclear weapons, says Trump