It was fired from the Sunan area in Pyongyang at around 6.30am local time, travelled around 3,700km over Japan into the Pacific Ocean. It reached a maximum altitude of 770km.

"The range of this test was significant since North Korea demonstrated that it could reach Guam with this missile, although the payload the missile was carrying is not known. Guam lies 3,400km from North Korea, and Pyongyang has talked about it as a target because of the presence of US forces at Anderson Air Force Base," wrote scientist David Wright on his blog.

The US Pacific Command, citing an initial assessment, said it had detected the launch of a single North Korean intermediate range ballistic missile (IRBM) that flew over northern Japan before landing in the Pacific Ocean. Japan said it is possibly the same type of missile fired over Japan on Aug 29 - a Hwasong-12 IRBM.

“We cannot assume North Korea’s intention, but given what it has said, I think it has Guam in mind,” Onodera said.  He warned that “similar actions (by the  North) would continue” as Pyongyang appeared to have shrugged off UN sanctions agreed earlier this week.

US President Donald Trump was briefed on the missile launch but made no mention of  North Korea in remarks at a White House dinner on Thursday night.

The latest missile launch came a day after the North threatened to sink Japan and reduce the United States to “ashes and darkness” for supporting a United Nations Security Council resolution imposing new sanctions against it for its Sept 3 nuclear test.  The new sanctions included limits on imports of crude oil and a ban on textile exports. North Korea on Friday  threatened to take "stronger" actions against the US in a commentary published in the Rodong Sinmun, a mouthpiece of the ruling party.  "If the US continues to walk on the current course, we will take stronger actions for our self-defence,

"The US should face up to a grim reality and make a decision to give up its hostile policy towards Pyongyang. It should make a wise decision to detach itself from issues on the Korean Peninsula," it said. 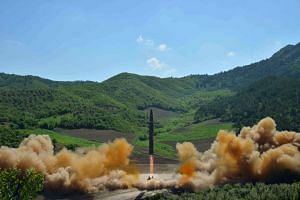 The  latest missile reached an altitude of about 770,000m and flew 3,700km, according to South Korea’s military – far enough to reach the US Pacific territory of Guam and farther than the Hwasong-12 missile it flew over Japan last month. 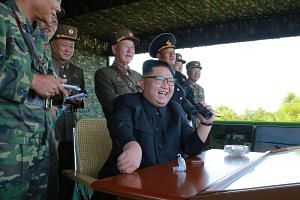 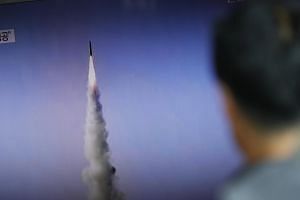 Japan Chief Cabinet Secretary Yoshihide Suga told reporters at a hastily organised media conference on Friday: “These repeated provocations on the part of North Korea are unpermissible and we protest in the strongest words.”

Japanese Prime Minister Shinzo Abe told reporters in Tokyo said "the international community needs to come together and send a clear message to North Korea that it is threatening world peace with its actions".

Just minutes after North Korea fired its missile at 6.30am local time, South Korea launched its Hyunmoo-2 ballistic missile off its east coast in a simulated pre-emptive attack, South Korean defence officials said.  Seoul said it had detected signs of North Korea's missile launch preparations on Thursday and that it was reported to President Moon Jae In  on Thursday afternoon.

Last month, North Korea triggered international condemnation when it fired an intermediate-range Hwasong-12 missile over Hokkaido. North Korean leader Kim Jong Un had said the Aug 29  firing was a "meaningful prelude" to containing the US Pacific island territory of Guam and the start of more ballistic missile launches targeting the Pacific Ocean.

Meanwhile, the US general who oversees America’s nuclear forces said that he was making the assumption that North Korea did, in fact, test a hydrogen bomb on Sept 3, crossing a key threshold in its weapons development efforts.

“I’m assuming it was a hydrogen bomb,” Air Force General John Hyten, head of the U.S. military’s Strategic Command, told a small group of reporters who were accompanying US Defence Secretary James Mattis on a trip to Hyten’s headquarters in Nebraska.

Mattis told reporters Friday's missile launch over Japan "put millions of Japanese into duck and cover" before it landed in the Pacific Ocean, although residents of northern Japan appeared calm and went about their business as normal after the second such launch in less than three weeks.