TOKYO/SEOUL (BLOOMBERG) - Japan and South Korea say they're willing to meet over Tokyo's move to restrict vital exports to its neighbour, but neither has much political incentive to climb down from their worst dispute in decades.

A series of looming deadlines, including a Japanese upper house election on July 21, are only raising the political pressure on both men, who can't afford to look weak dealing with disagreements rooted in Japan's 1910-45 occupation of the Korean peninsula.

On Wednesday (July 10), Mr Moon, who was elected in 2017 on a promise to reconsider his predecessor's moves to ease historical spats with Japan, warned business leaders in Seoul of a "prolonged" battle. At an election debate last week, Mr Abe accused South Korea of reneging on its promises.

"The leaders on both sides are incompatible with any sort of political rapprochement," said Mr Jonathan Berkshire Miller, a senior fellow with the Japan Institute of International Affairs in Tokyo who specialises in North-east Asian security issues. "The sense on Moon here is negative and Abe is obviously persona non grata in South Korea."

The flare-up stems from a series of South Korean court decisions ordering the seizure of Japanese corporate assets as compensation for Koreans conscripted to work in factories and mines during the colonial era.

The issue escalated from a regional diplomatic spat to a global trade worry last week after Mr Abe's government moved to curb the export of speciality materials vital to South Korea's technology sector.

The restrictions give Japan a mechanism to slow production by chipmakers such as Samsung Electronics Co and SK Hynix, squeeze the South Korean economy and disrupt supply chains dependent on their memory chips and components.

If left unchecked, analysts have warned of open economic warfare between the two key US allies, something they have avoided since Japan withdrew from the peninsula. 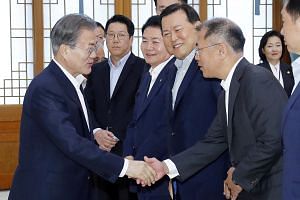 Moon calls for halt to curbs, warns of prolonged stand-off

Japan is also considering removing South Korea from a list of trusted export markets, a move that could affect a broader swath of products.

Mr Moon can't afford any more slippage on the economic front after being dealt a blow earlier this year when South Korea's gross domestic product in the first quarter shrank the most in a decade.

Ms Kang told her US counterpart that the export curbs could negatively impact the global trade order, according to the foreign ministry's website.

But the path to compromise has only grown more complicated.

South Korea has for weeks resisted Japan's demands for third-country arbitration to settle the forced-labour issues, arguing that conscripted workers have a right to pursue their claims in court.

Meanwhile, Mr Abe says that the export curbs stem from concerns about South Korea's control over the sensitive materials and are not related to the forced-labour dispute, putting any negotiations on separate tracks.

Japanese Economy Minister Hiroshige Seko said on Tuesday that he was open to a South Korean request to meet and discuss the curbs, but stressed that the government would only explain its position and not negotiate.

Speculation that the materials could have fallen into the hands of North Korea, where they could be used to make weapons, have added fuel to the fire. Mr Moon - sensitive to any suggestion that he's failing to uphold the US-led economic blockade on Pyongyang - dismissed the idea as "groundless".

"It is imperative for both countries and people to cool down from heated exchanges of emotional responses and to look at their important ties in a much broader perspective," said Mr Kak-Soo Shin, who served as South Korea's ambassador to Japan from 2011 to 2013.

Mr Shin called on the US to exercise "subtle influence on its two important allies in North-east Asia", urging Seoul to suggest a solution to the forced labour dispute and Tokyo to refrain from implementing the export measures.

The Trump administration, which has so far said little publicly on the dispute, could have an opportunity to weigh in, as new Assistant Secretary of State for East Asian and Pacific Affairs David Stilwell arrives in Tokyo on Thursday.

Absent some US intervention, both sides face a number of deadlines and politically charged milestones that could raise tensions.

"Neither side can solve this issue," said Mr Kunihiko Miyake, a former diplomat, now a visiting professor at Ritsumeikan University in Kyoto, Japan.

The turning point won't come until businesses and financial markets issue a strong message, he said, adding: "That's when either side or both sides will reconsider."