Hemmed in by the coronavirus pandemic and aggressive crowds of pro-military demonstrators on the streets, supporters of Myanmar's ousted National League for Democracy (NLD) party launched online campaigns, banged pots and pans in unison and vowed civil disobedience yesterday.

This follows the military coup that put State Counsellor Aung San Suu Kyi and other senior politicians under detention.

NLD condemned the coup via a Facebook post. The party called for the results of last year's Nov 8 election to be acknowledged and Parliament to be convened.

But no immediate reply was given by the government, which is now controlled by commander-in-chief Min Aung Hlaing. The senior general assumed full powers when a one-year state of emergency was declared on Monday.

On the same day, a list of new Cabinet members, stacked with former military officers, was announced. Many of them had served before, during the presidency of retired general Thein Sein. They include Mr Wunna Muang Lwin, who replaces Ms Suu Kyi as Foreign Minister, and Mr Win Shein, who replaces Mr Soe Win as Minister of Planning, Finance and Industry.

Yesterday, banks reopened, and Internet and phone connections that were slowed or shut on Monday were restored. According to the Myanmar Times, all flights have been suspended at least until end-April.

Local reports say the military asked elected lawmakers who had gathered in Naypyitaw for Monday's planned Parliament opening to return to their home towns. It is not known when 75-year-old Ms Suu Kyi, who was detained in her home in Naypyitaw, will be freed.

While hundreds of pro-military supporters rallied in Yangon yesterday, NLD supporters - wary of confrontations that might justify the coup or an extension of the emergency - stayed in.

"People are really desperate. They really want to do something and show their resistance," one veteran Yangon-based political activist, who asked not to be named for fear of retaliation, told The Straits Times. "But they are in a dilemma."

Myanmar's junta-crafted 2008 Constitution makes the Tatmadaw - Myanmar's armed forces - an autonomous entity alongside the civilian government that had been led by Ms Suu Kyi. Besides the ministries of defence, home affairs and border affairs, it is guaranteed a quarter of all parliamentary seats.

But the NLD's sweeping victory in the 2015 election, as well as the one last November when it won more than 80 per cent of the vote, reduced the kind of clout the military could muster with the help of allied parties. 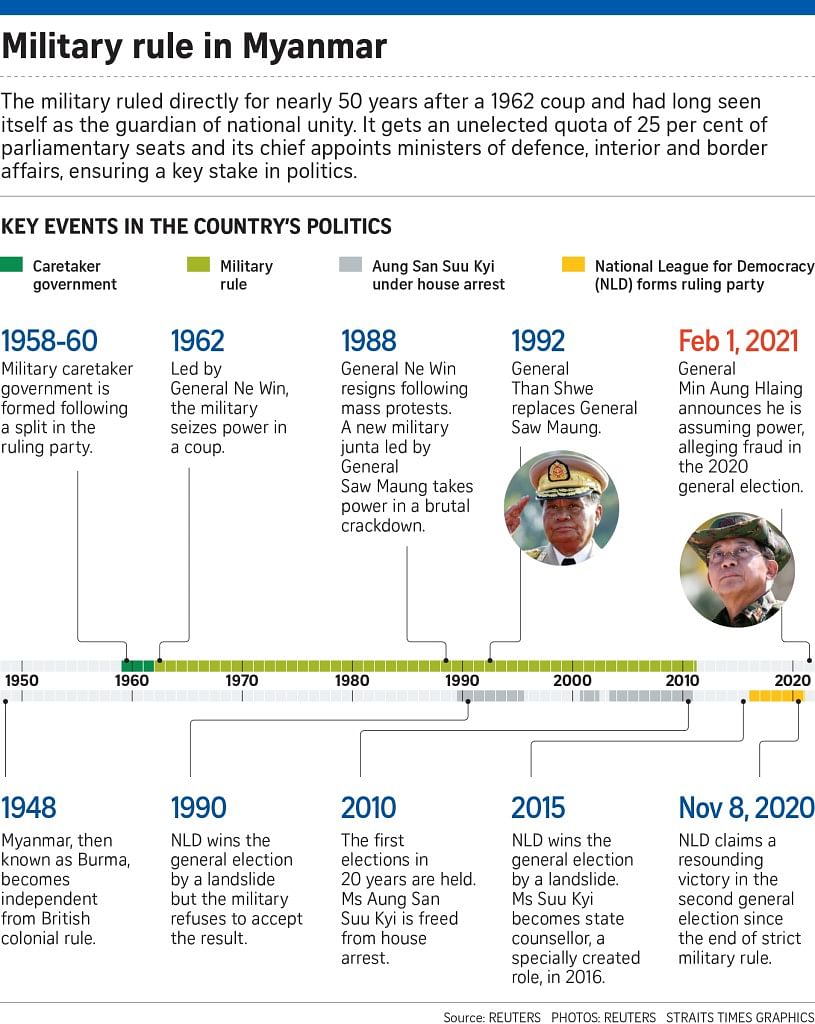 The Tatmadaw alleged massive electoral fraud, an allegation not backed up by election observers. In a statement on Monday declaring an emergency, it said the Election Commission's failure to ensure a free, fair and transparent election was a threat to the sovereignty of Myanmar.

NLD supporters turned their Facebook profiles black or replaced them with a red portrait of Ms Suu Kyi. Red is a signature colour of the NLD.

But several interviewed by ST said they will avoid rallying in the streets, wary that any unrest they create will legitimise the coup.

"If we are asked to vote, I will only vote for the NLD," said Ms Mu Mu Aye, a 62-year-old housewife. "But I won't do anything destructive or take part in any protest. I know (the opposite side) will pretend to be NLD supporters and cause riots."

The Covid-19 pandemic remains a threat in Myanmar. As at 8pm last evening, the country had logged 140,354 cases and 3,138 deaths. It began mass vaccination last month after a donation of 1.5 million vaccine doses from India, but it is unclear how this will proceed under the military government.

Myanmar-based democracy activist Thinzar Shunlei Yi, 29, says many NLD supporters are hesitant. "They are not sure who will give the order right now as Aung San Suu Kyi has been detained."