SEOUL (REUTERS, AFP) - North Korea on Sunday (Dec 24) called new UN sanctions an act of war and said strengthening the country's nuclear deterrence is only way to frustrate the United States, the North's foreign ministry said in a statement carried by the official KCNA news agency.

KCNA said the latest UN sanctions were "tantamount to complete economic blockade" of the country and that countries that supported the new sanctions would be responsible for all the consequences.

"The United States, completely terrified at our accomplishment of the great historic cause of completing the state nuclear force, is getting more and more frenzied in the moves to impose the harshest-ever sanctions and pressure on our country," KCNA said.

"We will further consolidate our self-defensive nuclear deterrence aimed at fundamentally eradicating the US nuclear threats, blackmail and hostile moves by establishing the practical balance of force with the US," KCNA said.

The UN Security Council unanimously imposed new sanctions on North Korea on Friday (Dec 22) for its recent intercontinental ballistic missile test, seeking to limit its access to refined petroleum products and crude oil and its earnings from workers abroad. 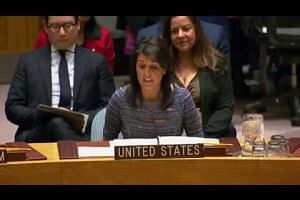 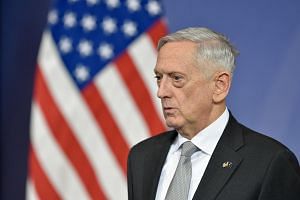 The UN resolution seeks to ban nearly 90 per cent of refined petroleum exports to North Korea by capping them at 500,000 barrels a year and, in a last-minute change, demands the repatriation of North Koreans working abroad within 24 months, instead of 12 months as first proposed.

The US-drafted resolution also caps crude oil supplies to North Korea at 4 million barrels a year and commits the Council to further reductions if it were to conduct another nuclear test or launch another ICBM.

“We define this ‘sanctions resolution’ rigged up by the US and its followers as a grave infringement upon the sovereignty of our Republic, as an act of war violating peace and stability in the Korean peninsula and the region and categorically reject the ‘resolution’,” the ministry said in its statement carried by KCNA.

"North Korea’s nuclear weapons are a self-defensive deterrence not in contradiction of international law,” it added.

“The US should not forget even a second the entity of the DPRK which rapidly emerged as a strategic state capable of posing a substantial nuclear threat to the US mainland,” it added, using the country’s official name, the Democratic People’s Republic of Korea.

North Korea said those who voted for the sanctions would face Pyongyang’s wrath.

“Those countries that raised their hands in favour of this ‘sanctions resolution’ shall be held completely responsible for all the consequences to be caused by the ‘resolution’ and we will make sure for ever and ever that they pay heavy price for what they have done.”

In November, North Korea demanded a halt to what it called “brutal sanctions”, saying a round imposed after its sixth and most powerful nuclear test on Sept. 3 constituted genocide.

US diplomats have made clear they are seeking a diplomatic solution but proposed the new, tougher sanctions resolution to ratchet up pressure on North Korean leader Kim Jong Un.

China, with which North Korea does 90 per cent of its trade, has repeatedly called for calm and restraint from all sides.  The Chinese Foreign Ministry on Saturday (Dec 23) said the new resolution also reiterated the need for a peaceful resolution via talks and that all sides needed to take steps to reduce tensions.

Widely read Chinese state-run tabloid the Global Times said on Saturday that the tougher resolution was aimed at preventing war, and noted the US had compromised with no indication the United Nations could grant the United States permission for military action.

“The difference between the new resolution and the original US proposal reflects the will of China and Russia to prevent war and chaos on the Korean Peninsula. If the US proposals were accepted, only war is foreseeable,” it said in an editorial.