SEOUL (WASHINGTON POST) - He was, according to the South Korean press, the "scene stealer" at the latest meeting in Pyongyang between North Korean leader Kim Jong Un and US Secretary of State Mike Pompeo.

Who was that white-haired Korean American man sitting at the table with Mr Pompeo and Mr Kim on May 9? The one smiling and laughing with Mr Kim and Mr Pompeo, the one featured on the front page of North Korea's Rodong newspaper and on the state television channel.

The mystery man was the subject of intense speculation in the South Korean media.

It turns out he is Mr Andrew Kim, the head of the CIA's Korea Mission Centre, and he is central to planning the summit between President Donald Trump and Mr Kim Jong Un, scheduled to take place in Singapore on June 12.

Although North Korea is upping the stakes for that summit, on Wednesday (May 16) threatening to cancel it if the Trump administration continued to insist on North Korea's unilateral denuclearisation, the White House said it was pressing ahead with preparations.

Many analysts view the threats as typical North Korean brinkmanship, doubting that they will derail the process.

As a result of his central role in the summit preparations, Mr Andrew Kim is now making his - almost certainly unwelcome - international debut thanks to a deluge of stories about him, many of which also note the colour of his hair, a novelty in a country where men routinely have suspiciously black dos well into their 80s. 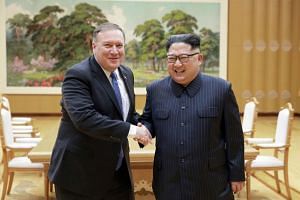 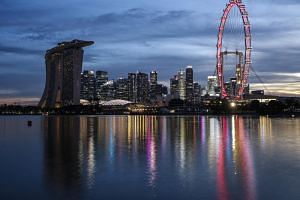 "Korean-origin 007," blared a headline on the broadcaster Channel A's website.

The CIA set up the Korea Mission Centre last May "to harness the full resources, capabilities, and authorities of the Agency in addressing the nuclear and ballistic missile threat posed by North Korea", according to a news release at the time.

"A veteran CIA operations officer has been selected as the new Assistant Director for Korea and presides over the Mission Centre," the statement said. However, it did not name the officer. And the CIA declined to comment for this article.

South Korean government officials this week confirmed media speculation that the mystery man in the photos of Mr Pompeo's meeting with Mr Kim Jong Un is indeed Mr Andrew Kim, who was born and raised in South Korea and forged important networks here.

Mr Andrew Kim is also Mr Chung's cousin and calls him "ajosshi" - the familiar Korean term for middle-aged man - in casual settings, rather than calling him by his title, a former intelligence official told the Chosun Ilbo newspaper.

"Andrew Kim is a US national, but he has familial and school-related ties in South Korea, and I personally think his affection for South Korea is quite deep," a presidential adviser who has met with Mr Andrew Kim on several occasions told reporters here, on the condition of anonymity to discuss their private conversation.

South Korea is a place that thrives on personal networks, especially those forged at school.

For that reason, Mr Andrew Kim's connections would help in the preparation of next month's summit, said Dr Jung Pak, who worked as a Korea analyst at the CIA until last year and knows Mr Andrew Kim.

Dr Pak, who is now at the Brookings Institution, declined to talk about Mr Andrew Kim specifically but said that having someone with such strong links to South Korean officials "suggests there's probably a high level of coordination going on, which is a good thing".

Dr Cha Du Hyeogn, a former South Korean intelligence adviser, agreed. "Such personal ties can be used to help keep in step with each other in these types of situations," he said.

Mr Andrew Kim moved to the United States with his parents during his high school freshman year, according to multiple local reports. He spent most, if not all, of his professional life at the CIA, serving in Moscow, Beijing and Bangkok, then as station chief in Seoul until he retired from the agency.

However, he was brought back to head the Korea Mission Centre when it opened last year, when the CIA was led by Mr Pompeo.

Mr Andrew Kim is widely viewed as a hawk on North Korea, so much so that the South Korean and Japanese press have been referring to him as a "grim reaper on North Korea" or the "messenger from hell".

He was involved in planning strikes on North Korea last year, said the South Korean presidential adviser. "When I met with him, I realised the US was seriously preparing military options, that these weren't mere bluffs from the North Korea hawks," he told local reporters. "They were drawing about some 20 scenarios for specific action plans, depending on different moves from North Korea."

But in an abrupt about-turn from planning strikes, this year Mr Andrew Kim is at the centre of the sudden burst of diplomacy that led to last month's inter-Korean summit and the announcement of next month's planned meeting between Mr Trump and Mr Kim Jong Un.

Mr Andrew Kim came to South Korea in February, at the same time that Vice-President Mike Pence was there for the opening of the Winter Olympics, another South Korean government official told reporters, also on the customary condition of anonymity. Meetings he had on that visit, the official said, paved the way for Mr Pompeo's first visit to Pyongyang, over Easter weekend.

Multiple South Korean reports say that Mr Andrew Kim accompanied Mr Pompeo, who was still head of the CIA then, on that trip to Pyongyang.

For his second trip to Pyongyang, Mr Pompeo, who had been confirmed as Secretary of State by then, took Mr Andrew Kim with him, rather than a Korean speaker from the State Department.

In many ways, a person who was once Korean but is now American is ideal for this job, said Dr Cha, the former intelligence adviser. "A Korean-American agent is somebody who speaks the same language as us, but as a US national, he is free from a certain sense of indebtedness to Korea."