SEOUL - South Korean President Moon Jae In's cordial summit with his Chinese counterpart Xi Jinping in Beijing is viewed as a "good signal" and "first step" in restoring ties frayed by a diplomatic row over Seoul's deployment of an American anti-missile defence shield.

Experts said both sides showed a willingness to mend ties instead of harping on the issue of the Terminal High Altitude Area Defence (Thaad) system, which Seoul installed for self defence despite Beijing's objection due to security concerns. But a complete thaw will come slowly, they added.

South Korea's presidential office noted on Friday (Dec 15) that the two leaders were in talks for more than two hours - double the allocated time - and Mr Xi spoke less about Thaad this time than when they met in Vietnam last month.

An official told reporters that it is a "good signal" that Mr Xi referred to it only as "the issue we all know" in his opening remarks in Beijing and brought it up briefly near the end of the summit. Mr Xi reiterated China's stand and asked South Korea to handle the issue "seriously" and "appropriately".

But he also warned that "political thaw will happen slowly" as China needs to move beyond "anti-Thaad sentiments that it generated but couldn't control once it was born". 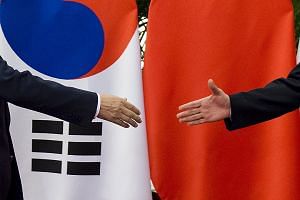 Mr Moon's first visit to China since his inauguration in May is viewed as an opportunity for both countries to restore economic ties damaged by Beijing-imposed boycotts targeting group tours to South Korea, K-pop and South Korean companies operating in China.

He was accompanied by a huge 260-strong business delegation. South Korean stars including Song Hye Kyo and Choo Ja Hyun joined him at the opening of a business fair in Beijing on Thursday.

The two countries inked an agreement to move beyond the Thaad row on Oct 31, but experts said it will take time for tourism and collaborations to return to pre-Thaad levels.

But as the overall impact on economic growth is limited to 0.2 to 0.3 percentage point after South Korea expanded trade and tourism with other countries, especially those from South-east Asia, some analysts said it is better to rely less on China - which accounts for one quarter of South Korea's exports - and continue to diversify its trade partnerships.

Despite the Thaad row, South Korean exports to China in the first 10 months of this year increased 12.5 per cent year on year to US$114.3 billion (S$154 billion), boosted mainly by an increase in Chinese demand for South Korea's semiconductors and chips.

"To mitigate the possible risks from political conflicts and economic or financial spillovers of the Chinese economy, it would be wise to diversify," said Dr Hyunju Kang, a research fellow at think-tank Korea Capital Market Institute.

"After 25 years, there is no more honeymoon period... (They) will live together, do business again, dine together, but there is no infatuation. They both know this."