Mr Moon flew to Pyongyang this week for his third summit with Mr Kim, seeking a concrete gesture to rekindle the stalled denuclearisation talks between the United States and the North.

But he returned on Thursday (Sept 20) with agreements that fell far short of US demands for a "final, fully verified denuclearisation" of North Korea.

"It's a dangerous gamble," Mr Shin said, adding that Seoul's emollient approach could facilitate efforts by the North to hold on to its nuclear weapons.

South Korea will be blamed if Pyongyang does not denuclearise, he said, adding: "It will put cracks in its alliance with Washington and Seoul will lose credibility." Mr Moon, who also met the North Korean leader in April and May this year, was instrumental in brokering the historic Singapore summit between US President Donald Trump and Mr Kim in June.

Mr Kim backed the denuclearisation of the "Korean peninsula" after meeting Mr Trump, but no details were agreed and Washington and Pyongyang have since sparred over what that means and how it will be achieved.

At the Pyongyang summit, Mr Kim agreed to permanently close the North's Tongchang-ri missile engine test site and launch pad under the eyes of foreign observers.

Analysts quickly dismissed the promise, saying the facility was outdated and no longer needed, as the already existing missiles were produced elsewhere.

The North Korean leader also offered to take further steps such dismantling the country's best known nuclear facility in Yongbyon, if the US carried out "corresponding measures".

Pyongyang is believed to have produced its plutonium at Yongbyon, which is also known to house a uranium enrichment plant.

But Dr Lee Sung-yoon of the Fletcher School at Tufts University noted that Yongbyon has been mothballed before, only to be reactivated when negotiations with the US fell through.

"The closure of Yongbyon, even were it actually to take place, does not mean a major concession, for Kim has alternate means to building more bombs by enriching uranium," Dr Lee added.

Mr Kim had already declared the North's nuclear development complete and the moves were "a sleight of hand for ensnaring the US... which will enable Kim to buy more time and money with which to perfect his own nuclear posture", Dr Lee told AFP.

Rather than shuttering outdated testing facilities, North Korea needed to provide a comprehensive list of its nuclear assets, said Dr Cha Du-hyeogn of the Asan Institute. 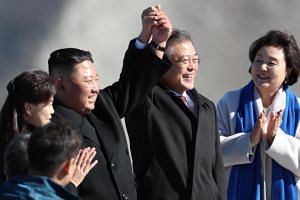 The US welcomed Mr Kim's latest promise, saying it was ready for immediate talks aimed at denuclearising the North, with Mr Trump quickly tweeting: "Very exciting!"

Secretary of State Mike Pompeo - whose visit to Pyongyang last month was abruptly cancelled by Mr Trump - also praised Mr Kim's "important commitments" and offered to meet his North Korean counterpart in New York, but analysts noted that Washington was acting with caution.

"The issue is whether Pompeo will return to North Korea but that's not immediately happening," Dr Cha said.

The new impetus will be a relief for Mr Trump who is embroiled in multiple scandals ahead of the US midterm elections in November, he noted, saying developments with North Korea will help "divert attention".

Mr Moon probably convinced Mr Kim by telling him that there was not a lot of time left until Mr Trump's political interest drifted elsewhere, he added. "If it wasn't for this, both Kim and Trump would not have budged." The biggest challenge may come soon, if the two mercurial leaders reunite for a second headline-grabbing meeting.

Mr Moon said after his Pyongyang trip that Mr Kim was hoping for another summit with Mr Trump "at an early date".

"The real problem is Trump himself is eager for a follow-up meeting with Kim," said Dr Lee.

That "will entail more concessions", he added, such as "further relaxation of sanctions enforcement and normalisation of Kim's image and stature".