Zhao Yaqi, the model and actress who had an affair with Chinese badminton star Lin Dan, made a tearful apology at a press conference on Tuesday (Nov 22).

Zhao, who was caught on film in intimate quarters with Lin, bowed and cried on camera as she read out her apology in Mandarin.

"I did not think my careless behaviour would affect and hurt others," she said.

Zhao, 34, also said that the past week was the worst she had ever experienced. 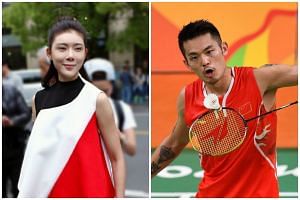 "I cannot hope for forgiveness, just for a chance (to turn over a new leaf), and for my family to return to a normal life," she said.

She also denied rumours that Lin bought her luxury cars and a house.

Lin Dan, who became a father early this month, apologised soon after the photos of the two of them having a tryst were leaked online on Nov 17.

Lin's wife, Xie Xingfang also released a statement last week saying she will forgive her husband for cheating on her.