WASHINGTON -  President Trump’s abrupt new tariff on imports from Mexico alarmed industry and led to jitters in markets even though Mexican President Andrés Manuel López Obrador insisted on Friday (May 31) that he wanted to avoid a clash with Washington but would defend the interests of his country.

Mr Trump’s move dampened prospects of deals on trade with Mexico and Canada as well as China.

On Thursday (May 30) night in Washington the US leader, invoking national security, announced that he would slap a 5 per cent tax on all imports from Mexico beginning June 10, to force Mexico to stop the flow of migrants across its territory to the United States.

The US is holding over 80,000 migrants in overflowing detention centres, officials said. “At any given moment, up to 100,000 migrants are transiting Mexico on their way to the US border,” acting Secretary of the Department of Homeland Security, Kevin McAleenan, told journalists.

The tariffs would rise to 10 per cent on July 1, 15 per cent on Aug 1, 20 per cent on Sept 1, and 25 per cent on Oct 1 – remaining at that level “unless and until Mexico substantially stops the illegal inflow of aliens coming through its territory,” the President said.

But he added: “Workers who come to our country through the legal admissions process, including those working on farms, ranches, and in other businesses, will be allowed easy passage.” 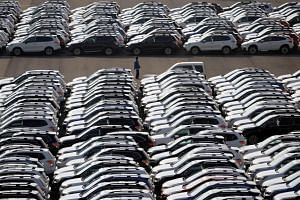 US-China trade negotiations are at an impasse. The US has also threatened to tax automobiles from Japan and the European Union. Mexico negotiated revisions to Nafta (the North American Free Trade Agreement), and agreed to the new US-Mexico-Canada Agreement (USMCA) only to be hit with the new tariffs which are not related to any trade dispute.

“A US-China trade deal will be even less likely,” Khoon Goh, head of research at Australia & New Zealand Banking Group Ltd. in Singapore told Bloomberg Business News. “At the end of the day, what’s the point of doing a deal if the US can just impose tariffs arbitrarily?”

The USMCA is up for ratification by Congress in Washington; that is now unlikely to happen any time soon. Republican Senator and Senate Finance Committee chairman Chuck Grassley in a statement on Thursday said: “Trade policy and border security are separate issues. This is a misuse of presidential tariff authority.”The move would “seriously jeopardise passage of USMCA,” he added. “I support nearly every one of President Trump’s immigration policies, but this is not one of them.”

Mexican President Andrés Manuel López Obrador told a regular news conference in Mexico City that he would send his Foreign Secretary Marcelo Ebrard to Washington to discuss the issue.

He also said that he believed Mr Trump would understand in due course that the tariff threat was not the way to resolve the matter and stressed that Mexicans had united behind his government.

It is not clear what criteria will be used by the US to determine whether or not to adjust the tariffs. This has spawned a wave of uncertainty. “It is hard to wake up in the morning and have to deal with a new reality,” Mr Marwan Forzley, CEO of Veem, a global payments company built for small businesses, told The Straits Times. Small businesses do not have the capacity to deal with abrupt changes the way large companies may be able to, he said.

The two economies have a symbiotic relationship. Mexico is currently the US’s third largest goods trading partner with US$611.5 billion ($841.5b) in total two-way goods trade during 2018, according to the office of the US Trade Representative. Trade in services totaled an estimated US$59.4 billion in 2018, with the US running a surplus of US$ 8.8 billion.

US-Mexico manufacturing supply chains are highly integrated, with two-thirds of US imports taking place between factories owned by the same company, tweeted Liz Ann Sonders, Senior Vice President and Chief Investment Strategist at Charles Schwab. Some manufactured items even cross border more than once; new tariffs could make them prohibitively expensive, she warned.

John Negroponte, vice chairman of consultancy McLarty Associates and a former US ambassador to Mexico and Honduras among other countries, commenting on the Trump decision, told CNBC : “I think it’s both bad politically and bad economically and I don’t think it’s really going to help solve the immigration problem, either.”

Raoul Leering, Head of International Trade Analysis at ING, said:  “This doesn’t bode well for the trade negotiations with Japan and the European Union. Trump’s latest move shows he is not afraid of fighting multiple trade wars at the same time. So we expect that he will threaten to hike tariffs again if the EU and Japan don’t sufficiently acquiesce to his demands to grant the US better terms of trade.”

“Americans are paying for this right now,” he said. “Illegal immigration comes at a cost. The American taxpayer is paying for what’s going on… at the border.”

“We actually have some level of confidence that the Mexican government will be able to help us in a very, very timely fashion,” he said.

Correction note: An earlier version of this story stated that Raoul Leering is based in Singapore. He is based in the Netherlands.