TOKYO (AFP) - German Chancellor Angela Merkel called on Tuesday (Feb 5) for safeguards to ensure Chinese firms do not hand over private data to Beijing amid mounting security concerns over equipment made by telecoms giant Huawei.

Speaking at Keio University in Tokyo, Merkel said there was a "big debate" in Germany about using Huawei equipment, with growing calls to prevent the firm building 5G networks around the world.

Germany has taken a prudent approach so far, with the country's IT watchdog saying it had seen no evidence Huawei could use its equipment to spy for Beijing.

But Merkel said it was necessary to talk to Beijing "to make sure that the company does not simply give up all data that is used to the Chinese state, but that there are safeguards".

Merkel also said safeguards needed to be put in place to ensure that "when you are working in Germany, that the Chinese state cannot access the data on all Chinese products".

Huawei has quietly become a leading supplier of the backbone equipment for mobile networks, particularly in developing markets, thanks to cheaper prices.

But a growing number of Western states are turning their backs on Huawei, fearful that its equipment could be a Trojan horse for Beijing's security apparatus as Chinese laws require its firms to cooperate with intelligence services. 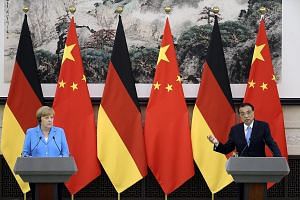 Trade a key focus for Merkel in China

China courts friends in low places to win in Europe

Huawei strenuously denies its equipment could be used for espionage.

"This will continue to be debated and discussed and it is also part of the discussion with the United States," said Merkel.

The chancellor also said China's growing economic clout meant that it had a "growing responsibility for a peaceful world order".

She said Beijing would have to step up its place in the world order - for example in participating in United Nations missions - as its clout increased.

Merkel is on a two-day visit to Japan. She has already met Prime Minister Shinzo Abe and Emperor Akihito, and is expected to hold talks with Japanese and German business leaders later on Tuesday.