TOKYO (NYTIMES) - As a powerful typhoon tore through Japan this week, travellers at Kansai International Airport looked out on a terrifying void: Where there should have been the runway, they saw only the sea.

They also saw what could be a perilous future for low-lying airports around the world, increasingly vulnerable to the rising sea levels and more extreme storms brought about by climate change.

A quarter of the world's 100 busiest airports are less than 10m above sea level, according to an analysis from Airports Council International and OpenFlights.

Twelve of those airports - including hubs in Shanghai, Rome, San Francisco and New York - are less than 5m above sea level.

"We were trapped," said Mr Takayuki Kobata, a Web entrepreneur who had hoped to board a Honolulu-bound plane from Kansai, a vast airport on an artificial island near Osaka. "We just had to wait for the storm to blow over."

He spent close to 36 hours trying to find a way off the flooded island, a task further complicated by a ship that ripped from its moorings and crashed into the bridge from the airport to Osaka, severely damaging the roadway.

The threat from rising waters comes as a reckoning for an industry that ranks among the major contributors to climate change. Air travel accounts for about 3 per cent of greenhouse gas emissions worldwide, but is one of the fastest-growing emissions sources.

Given current trends, emissions from international air travel will triple by 2050, the International Civil Aviation Organisation has predicted.

As the aviation industry grapples with its carbon footprint, it has also started to feel the effects of global warming. Extreme heat can ground planes because hotter, lighter air makes achieving lift difficult. A changing climate can also increase turbulence.

Low-lying areas along the water have long been seen as ideal sites for building new runways and terminals, because there are fewer obstacles for the planes during takeoff and landing, and less potential for noise complaints. But coasts also provide few natural protections against flooding or high winds.

All told, extreme weather and rising sea levels today pose one of the most urgent threats to many of the world's busiest airports, which often were not designed with global warming in mind.

Hurricane Sandy in 2012 inundated all three airports that serve New York City, crippling travel for days. Typhoon Goni closed runways at Hongqiao International Airport outside Shanghai in 2015, forcing passengers and crew members to teeter on improvised bridges of tables and chairs as they tried to reach dry ground.

The worst floods in nearly a century in Kerala, India, killed more than 400 people last month, and the deluge caused Cochin Airport, a regional hub, to close for two weeks.

"We know that there are going to be impacts. And we expect those impacts to become serious," said Mr Michael Rossell, deputy director-general at Airports Council International, a group representing airports from across the world.

Many airports have started to bolster their defences.

St Paul Downtown Airport in Minnesota, which has been frequently flooded by the Mississippi, now has a portable flood wall that can be erected if the river starts to overflow. 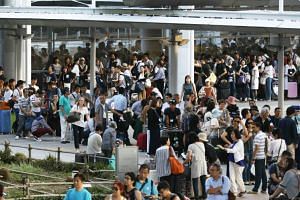 With the help of a US$28 million (S$38.5 million) federal grant, La Guardia Airport in New York is adding a flood wall, rainwater pumps and a new drainage system for the airfield, as well as upgrading its emergency electrical substations and generators.

A feat of modern engineering, Kansai sits on an island about 5km offshore that was built over the course of a decade from two mountains' worth of gravel and sand. The airport, which opened in 1994, was built in Osaka Bay partly to minimise noise problems but also to avoid the violent protests over land rights that are the legacy of older airports in Japan, like Narita, which serves Tokyo.

Signs of trouble came early. Engineers had expected the island to sink, on average, less than 30cm a year over 50 years after the start of construction as the seabed settled under the airport's weight. But the island sank more than 9m in its first seven years and has continued to descend, now losing 13m in elevation at the last measurement.

At that rate, at least one of the airport's two runways will slip under the waves completely by 2058, according to dire predictions made in a 2015 paper by Dr Gholamreza Mesri, a civil engineering professor at the University of Illinois at Urbana-Champaign, and Mr J.R. Funk, a geotechnical engineer.

And with sea levels rising because of climate change, Dr Mesri added, the airport could be underwater even sooner.

"You won't have an airport, you'll have a lake," he said.

The doomsday forecast from the American researchers has enraged some in the Japanese engineering community.

"It's irresponsible," said professor Yoichi Watabe of the engineering faculty at Hokkaido University, who has researched Kansai airport's woes. He conceded, though, that the prediction was not entirely implausible.

Even so, Dr Watabe said, the study assumed that Japan, a nation with a sterling reputation for advanced engineering, "will just watch it sink with our thumbs in our mouths".

To stay above the waves, Kansai airport is pumping water from the seabed beneath the island to speed up the settlement process. The main terminal rests on giant stilts that can be jacked up to keep the foundation level.

The airport also uses giant pumps to drain its airfield after heavy rain, and has added to a series of sea walls on the island's perimeter.

Engineers had boasted that the walls were tall enough to withstand storms as strong as a major 1961 typhoon that caused the sea to surge 2.7m. But Typhoon Jebi, which killed 11 as it tore through west Japan this week, generated a storm surge that reached almost 3.3m, a record for Osaka Bay. Waves crashed over the airport's sea walls and swamped its pumps, officials said.

To make things worse, an oil tanker unmoored by the powerful typhoon's 130 mph winds struck and damaged the only bridge to the mainland. With nowhere to go, 8,000 people huddled in darkened terminals overnight as waves lapped at the buildings' walls, before emergency ferries and buses found a way to navigate the mangled bridge and shuttled passengers to safety.

It remains unclear when the battered airport will fully reopen. Prime Minister Shinzo Abe said on Thursday (Sept 6) that Kansai would reopen Friday (Sept 7) to domestic flights, using the shorter of its two runways, which escaped the worst of the damage.

At a televised news conference Thursday, Mr Yoshiyuki Yamaya, the president of the airport's operator, was contrite.

"We geared up for a typhoon, but the typhoon was far stronger than we had expected," he said. "We were too optimistic."