TOKYO (REUTERS) - A majority of Japanese believe Prime Minister Shinzo Abe bears some responsibility for altered documents at the centre of suspicions of a cover-up linked to cronyism, according to an opinion poll on Sunday (March 18) that also showed his support sliding.

In his worst crisis since taking office in 2012, Mr Abe and Finance Minister Taro Aso have been under fire since the finance ministry said on March 12 it had altered records relating to a discounted sale of state-owned land to school operator Moritomo Gakuen, which had ties to Mr Abe's wife, Akie.

References to Mr Abe, his wife, and Mr Aso were removed from the finance ministry's records of the sale, copies of documents released by the ministry showed.

Both men have denied any wrongdoing in the affair.

But 66.1 per cent of respondents to a poll conducted by Kyodo news agency on Saturday and Sunday said they felt the premier had some responsibility for the altered documents. Only 25.8 per cent said they thought he didn't.

Protesters have flocked to the streets by the prime minister's office every night since the ministry admitted altering the documents, with some 2,000 on Friday calling for Mr Abe and Mr Aso to resign.

The poll also showed Mr Abe's support slipping by 9.4 per cent to 38.7 per cent in the two weeks since the last poll was conducted, while 48.2 per cent said they did not support him. 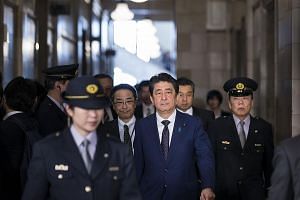 A Friday survey had a similar drop in support but only 40.4 per cent said then that they did not support Mr Abe.

Opposition parties are calling for Mr Aso to resign, while the affair could dash Mr Abe's hopes of winning a third three-year term as head of his Liberal Democratic Party in a September party leadership election. Mr Abe took office in December 2012.

Mr Aso has repeatedly refused to resign and has said the responsibility for the land sale lay with Nobuhisa Sagawa, who stepped down as tax chief ten days ago. Mr Sagawa headed the division that submitted the documents before he became tax agency chief in July.

But the finance ministry announced on Friday that Mr Aso will not attend a meeting of G20 finance leaders this week. A ruling party source told Reuters this was so he can address parliament on Monday about the scandal.