SEOUL (AFP) - The nonagenarian founder of South Korean retailer Lotte Group went from rags to riches but faces the prospect of ending his days in prison after being convicted of embezzlement and other offences on Friday (Dec 22).

Born in the southern city of Ulsan in 1922, Shin Kyuk Ho, now 95, smuggled himself aboard a ship at the age of 18 as a stowaway to go to Japan, Korea's colonial overlord at the time, to seek his fortune.

Known as Takeo Shigemitsu in Japan, he opened his first business - a Tokyo factory producing rice cookers - in 1942, borrowing 60,000 yen (S$711) to do so, but it was destroyed in an air raid.

Undaunted, he took out another loan to set up a plant producing soap and facial creams, which turned out to be a huge success.

He paid off all the debts, launched a lab developing chewing gum and established a confectionery firm with other investors, naming it Lotte after the character in Goethe's novel The Sorrows of Young Werther, which was hugely popular among young Japanese at the time.

The business prospered, moving into food, property development and distribution, and in 1966 it expanded to Shin's home country.

Despite its late arrival, it quickly developed the close ties with the authorities that are typical of the family-controlled conglomerates, known as chaebol, that dominate the world's 11th-largest economy.

Shin and the military dictator Park Chung Hee - whose daughter Park Geun Hye was ousted as president earlier this year over a corruption scandal - embraced each other.

Shin alternated between the two countries, spending odd-numbered months in South Korea and even-numbered ones in Japan, although he has stayed mainly in his home country since the earthquake and tsunami that hit its neighbour in 2011.

Lotte had 93 subsidiaries and sales of 83 trillion won (S$104 billion) in 2016. But the company Shin created has been battered by turmoil within his own family.

He has four children from three different women. His first wife, a Korean, died in 1951 after giving birth to a daughter.

The two brothers have been at the centre of a fierce family feud over succession at the group, which ended in Dong Bin taking the wheel.

All three elder siblings were in the dock alongside their father, as was his mistress.

He then entered a relationship with her - which produced a daughter - and she disappeared from public view, only resurfacing last year as a result of the scandal.

Korean tycoons usually retain power over their conglomerates via complex webs of cross-shareholdings that give them control without majority ownership. 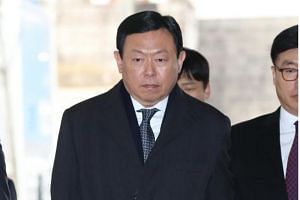 As a whole, the Shin family own just 13.3 per cent of Lotte Holdings, the group's ultimate parent company, with Seo and her daughter accounting for more than half the stake.

Shin was convicted of embezzlement and other offences on Friday and sentenced to four years in prison, with his elder daughter given two years.

Seo and Dong Bin were given suspended terms, while DongJoo was cleared.

Shin was allowed to remain free on health grounds pending an appeal - he is confined to a wheelchair and suffers from diseases of old age, including dementia.