BEIJING - Singapore and China have upgraded a defence pact that will include frequent high-level dialogues and larger-scale military exercises and interactions involving all three arms of their military - the army, navy and air force.

Troops from the two countries will also visit each other under a new Visiting Forces Agreement, while a mutual logistics support arrangement has been agreed upon.

The new collaboration is a top-up of the Agreement on Defence Exchanges and Security Cooperation signed in 2008. That agreement formalised ongoing defence collaboration such as exchanges of visits and port calls.

Besides a regular ministerial-level meeting, the two sides also promised to continue to send their top defence officials to multilateral conferences, such as Singapore’s annual Shangri-La Dialogue and China’s Xiangshan Forum in Beijing.

There will also be academic exchanges between military academies and think-tanks of both countries, while a bilateral hotline will be set up.

While this year will be Dr Ng’s fourth time speaking at the Xiangshan Forum, which is now into its ninth year, China has for much of the past decade sent lower-level officials to the high-profile Shangri-La Dialogue.

But all that changed this year, when General Wei became the first Chinese defence minister to attend the security conference since 2011, amid growing rivalry between the United States and China in the region.

When Singapore was Asean chair last year, it also helped usher in the first joint maritime exercise between the regional bloc and China in October. 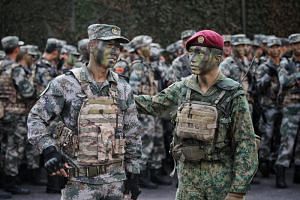 Earlier on Sunday, Dr Ng had a bilateral meeting with General Wei, during which they discussed institutionalising and scaling up their joint army and navy exercises, Exercise Cooperation and Exercise Maritime Cooperation.

The fourth instalment of Exercise Cooperation between the Singapore Armed Forces (SAF) and China’s People’s Liberation Army (PLA) took place in July in Singapore. Exercise Maritime Cooperation has been held once so far: in 2015.

A statement from Singapore’s Defence Ministry said Dr Ng’s visit to China “reflects the growing defence and bilateral ties between both countries”.

Promoting stronger military ties with China is also in Singapore’s interest, as it takes into account China’s rising clout and influence and how that is shaping the regional security architecture.

But the Institute of Defence and Strategic Studies research fellow also pointed out challenges in this upgraded deal.

One, the SAF and PLA have different organisational cultures, doctrines and equipment, which means it will take time to improve interoperability and expand the scope of joint training.

Two, Singapore needs to manage operational and technological sensitivities given its close defence and security links with the West, especially the US, from whom the SAF buys large amounts of military equipment.

“Fostering closer ties with the PLA should not be misperceived as at the expense of undermining the longstanding trust and cooperation with the US military. So it’s a delicate balance to strike,” said Dr Koh.