KUALA LUMPUR (AFP) - Malaysian prosecutors on Monday (March 11) unexpectedly dropped a murder charge against an Indonesian woman who had been accused of assassinating the half-brother of North Korean leader Kim Jong Un.

Siti Aisyah walked free from a court outside Kuala Lumpur after prosecutors withdrew the charge without giving any reason. She was accused alongside Doan Thi Huong from Vietnam, who remains on trial, of the brazen murder of Kim Jong Nam at a Malaysian airport in February 2017.

Here is a timeline of key events in the killing.

A portly North Korean man, later identified as Mr Kim Jong Nam, dies after being attacked at Kuala Lumpur International Airport on Feb 13, 2017. Seoul points the finger at its northern neighbour and says it was a political hit aimed at weeding out potential rivals to North Korean leader Kim Jong Un.

Malaysian detectives track down two foreign women - Aisyah and Huong - who they say are seen on CCTV carrying out the attack.

The two women, who are eventually charged with murder, say they had been paid to carry out what they thought was a prank for a reality TV show.

An autopsy reveals that Mr Kim died from exposure to the VX nerve agent, an artificial chemical so deadly that it is banned under international treaty and classified by the United Nations as a weapon of mass destruction.

Kuala Lumpur arrests North Korean citizen Ri Jong Chol in connection with the murder. Over the following days, investigators say diplomats and airline employees from the isolated regime are also wanted for questioning. All are holed up at the North Korean embassy or have already left the country.

North Korea pours scorn on what it calls "absurd" claims that VX was used, saying South Korea and the United States are mounting a smear campaign against it.

Pyongyang insists the dead man was called Kim Chol and demands his body be returned. Investigators refuse to release the corpse.

Tensions escalate after North Korea bans all Malaysians from leaving Pyongyang. Malaysia retaliates and the international community calls for calm amid allegations of hostage holding.

In early March, Ri is released from custody and deported from Malaysia. Frustrated Malaysian police say they believed he was involved in the plot but lacked evidence to prove it. 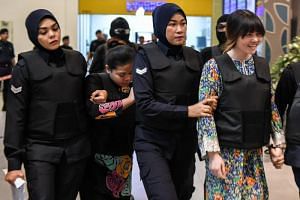 At the end of the month, Malaysia's then Prime Minister Najib Razak announces an agreement has been reached to return the body to North Korea. Nine Malaysians stuck in Pyongyang will be free to travel and North Koreans in Kuala Lumpur will be allowed to go home.

In October, Aisyah and Huong go on trial over the murder. They maintain their innocence.

Four men formally accused on a charge sheet of plotting with the women to murder Mr Kim are identified by a police officer as North Koreans who fled Malaysia immediately after the assassination. The women's lawyers insist they are the real masterminds.