TOKYO (REUTERS) - Japanese Prime Minister Shinzo Abe kicked off debate on Friday (Oct 5) on an overhaul of the welfare system in what is likely to be his last major economic reform during his final term in office.

Abe has pledged to come up with a plan to keep older people in the workforce longer and to reduce the financial burden Japan's rapidly ageing population places on the pension system.

"I want to study how to raise the retirement age above 65," Abe said on Friday at an advisory panel on investing for Japan's future.

The panel met for the first time since Abe won a leadership vote for his party last month, which granted him a final three-year term as prime minister and a chance to cement his legacy.

Advisers at the meeting also presented a rough draft of policy ideas, including encouraging more use of industrial robots and artificial intelligence in both the government and the private sector.

During his campaign for the leadership vote, Abe said his main priority for economic policy would be to raise the retirement age above 65 and allow the elderly to defer pension payouts beyond the age of 70.

Fewer workers are paying into the national pension scheme due to a shrinking workforce, but more elderly are withdrawing funds as they retire. 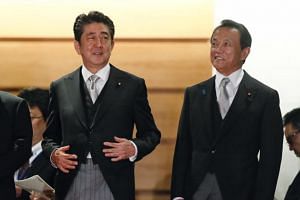 Economists have long argued for bold steps to reduce pension payouts, but many worry that Japan's population is shrinking and ageing so rapidly that the government cannot keep up.

Abe has also promised to invest in infrastructure to cope with the natural disasters that increasingly batter Japan, though more spending could make it harder to rein in the debt burden, which at more than twice the size of Japan's US$5 trillion (S$6.9 trillion) economy is the worst in the world.

Abe surged to power in 2012 promising to reboot the economy, and he oversaw a combination of radical monetary easing, fiscal stimulus, and labour reforms, known as Abenomics, which met with some initial success.

However, some critics argue that Abenomics did not create enough high-paid jobs in services, that it failed to foster enough innovation, and ultimately wasn't able to generate sustained inflation as some low-income households were left behind.