The future husband of the 27-year-old princess is Mr Kei Moriya, a commoner and graduate of Keio University in Tokyo, who met the princess for the first time in December last year through an introduction by Princess Hisako, Japan Times reported.

Their engagement will be formally announced next Monday, and the couple is set to hold a news conference later that day at the Imperial Household Agency, the report said.

The couple will become officially engaged in a traditional court ceremony called "Nosai no Gi" on Aug 12 and their wedding ceremony is planned for Oct 29 at Meiji Jingu Shrine in Shibuya Ward, Tokyo, according to an agency spokesman.

Princess Ayako, who has studied at Canada's Camosun College and the University of British Colombia, currently serves as Honorary Patron of the Canada-Japan Society, a public organisation to promote the mutual understanding and friendship between Japanese and Canadian nationals.

Born on Sept 15, 1990, Princess Ayako graduated from Josai International University in Chiba Prefecture and completed a master's degree in social work in 2016.

Mr Moriya's mother had served as the executive board member of Tokyo-based nonprofit organisation Kokkyo naki Kodomotachi (KnK), which can be translated as Children Without Borders, and he has become a board member. According to the Imperial Household Agency, Princess Hisako introduced Mr Moriya, whose late mother was her longtime friend, to Princess Ayako in the hope that she might become interested in international welfare activities for children. 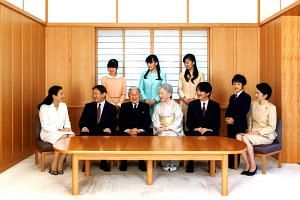 Princess Mako to marry a commoner: Some things to know about Japan's 4 royal grandchildren

Who are these hot young royals?

Princess Ayako is the second Japanese princess in two years to announce that she is marrying a commoner, a move that will force her to renounce her royal status under the Imperial House Law.

Princess Mako, 26, the eldest granddaughter of Emperor Akihito and Empress Michiko, is set to become engaged with Mr Kei Komuro, 26, also a commoner, who courted her while she attended university, although their formal wedding was postponed to 2020 due to "lack of preparation."

The planned marriages of Princesses Ayako and Mako will reduce the number of Imperial family members to 17, further increasing the weight of public duties for each of the family members.

The princesses' departure could also reignite public debate over the revision of the Imperial House Law, which only allows male members to succeed the Imperial Throne.

The Imperial family now has only one unmarried male - 11-year-old Prince Hisahito, the only grandson of Emperor Akihito - raising concerns over the sustainability of the male-only succession tradition in what is believed to be the world's oldest monarchy.

In June last year, the Diet enacted a special law that will allow Emperor Akihito, now 84, to abdicate after he cited concerns over his advanced age and failing health. The Diet attached a resolution to the law, which calls on the government to consider "measures to secure stable Imperial succession," including legislation to allow a married princess to retain her royal status and create her own branch within the Imperial family.

Under the special law, the Emperor is set to abdicate April 30 next year and his elder son Crown Prince Naruhito will succeed the throne.