TOKYO (REUTERS) - Like many Japanese pachinko parlours, Naomi Suzuki's shop on the outskirts of Fukushima City was once full of energy, with the din of bouncing steel balls and garish lights flashing to indicate winnings.

But business is quieter for her these days as her parlour's clientele ages and drifts away. And with new restrictions on the game this year, she and her industry are bracing for things to get much worse.

The rules, aimed at curbing gambling addiction, are part of a policy barter that helped legalise casinos in 2016 despite widespread opposition. Japan passed regulations on casino developments last week, including those on gambling addiction.

The new anti-addiction rules call for pachinko machines to reduce payouts. That means players win and lose money more slowly - and will perhaps find the game less exciting and addictive.

Pachinko halls are required to comply in the next three years. Owners like Suzuki worry not only about the cost of replacing machines, but that regulars will find the new games too dull.

"If you restrict the excitement so much, people will quit," she said. "The point of allowing casinos was to bolster regional finances. But the pachinko industry will be taking the hit."

The industry, which gained nationwide popularity after World War II, has already been in decline because of a shrinking population. Younger generations tend to favour online games and other sources of betting.

The overall industry has shrunk to about 20 trillion yen (S$245 billion) from around 30 trillion yen a decade ago, according to Japan Productivity Centre, which compiles statistics on the leisure industry.

Pachinko halls have tried to keep players entertained by incorporating animation and high-tech features into the games.

But the basic rules remain the same: players try to bounce steel balls into parts of the board that reward them with a payout of more balls.

Balls can exchanged for prizes, which can be redeemed for cash at a nearby exchange point in a three-step process designed to skirt regulations.

The number of pachinko halls has fallen to about 9,600 from over 17,000 two decades ago, according to data based on statistics collected by the National Police Agency, which regulates the industry.

Pachinko hall operators are going bankrupt more often; 29 did so last year compared with 12 in 2016, according to credit data agency Tokyo Shoko Research.

Daiwa Securities analyst Takao Suzuki predicts that more pachinko halls will shut down, and that operators nationwide will see sales fall up to 20 per cent.

"It's a big problem for parlours that cannot afford it," he said. "At the moment, there are estimated to be 4,000 to 5,000 parlours that are not buying new machines."

But few Japanese, aside from pachinko enthusiasts, have sympathy for the industry.

Many pachinko businesses are owned by ethnic Korean minorities, who have traditionally faced discrimination in other, more mainstream industries.

A government survey last year found that 3.6 per cent of Japanese have been addicted to gambling at some point, higher than the 1-2 percent average in other developed countries, and that pachinko was the top destination for gamblers.

The industry has not lobbied hard against the new rules, partly because bigger and more influential companies are positioned to benefit from the changes.

Companies that make pachinko games such as Heiwa Corp are likely to profit in the short term as parlours buy new machines.

And some big pachinko companies, including game makers and hall operators like Sega Sammy Holdings and Dynam Japan Holdings Co, are planning to expand into casino entertainment in Japan.

Industry insiders say that in recent years, operators have focused on high rollers as their customer base shrunk.

Hiroyoshi Fukaya of the pachinko industry publication GreenBelt said pachinko enthusiasts these days were often ready to spend 100,000 yen (S$1,226) in just one visit, compared with around 10,000 yen to 20,000 yen years ago. 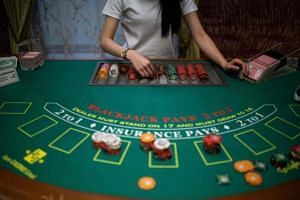 Some analysts said the regulations would help return pachinko to its origins as a form of popular entertainment.

"We see it as a chance to expand the player base, and to gain the participation of a younger generation," said Kimiharu Sato, a director at Dynam Co.

Dynam has already shifted its emphasis toward low-stakes "one-yen" machines. But owners of smaller pachinko parlours say such games are only profitable for the biggest chains.

"At our scale, we cannot survive," owner Suzuki said in her office at the back of her pachinko hall. She reminisced about its heyday when the carpark was regularly full and so many customers queued outside when new machines were installed that the shop provided portable toilets.

By contrast, on a recent weekday afternoon, the carpark was mostly empty.

"We have a lot of elderly customers," she said. "If these neighbourhood pachinko shops are gone, some elderly people who have enjoyed it as a pastime will have nowhere else to go."