TOKYO (AFP, XINHUA) - The death toll in a 6.1-magnitude quake that rocked Osaka on Monday has risen to five, with some 370 injured, officials said Tuesday (June 19), urging vigilance against landslides ahead of heavy rains.

Dozens of aftershocks have continued through Tuesday with a significant tremor hitting again in the early hours and jolting the entire region again.

The fifth fatality was a 66-year-old man who was found dead on Tuesday under a number of books and CDs in his home, a local government spokeswoman said.  The other casualties were a nine-year-old girl who was killed when a wall collapsed at her school following the 5.3-magnitude quake, along with two men and a woman, all in their eighties, who were trapped under a wall or furniture.

“The government will keep up efforts to rescue people,” top government spokesman Yoshihide Suga told reporters, though he added that there were no reports of missing people.  And he said officials would do “everything we can” to quickly restore gas and running water to homes cut off after the quake. 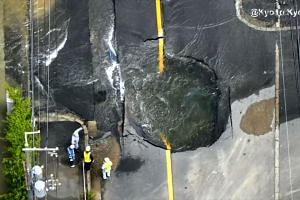 Japan’s meteorological agency meanwhile warned that heavy rains expected in Osaka on Tuesday and Wednesday could cause landslides in the region, with the quake potentially having loosened earth.

Suga also called for residents to be on alert, saying “landslide disasters are possible in the region that experienced strong tremors, even if rains are light.”

“Normally we don’t issue warnings with this level of rains, but after the quake it could cause landslides, floods and swelling river streams,” official Masakatsu Oya told AFP.

Authorities have also warned of the possibility of strong aftershocks in the coming week and especially in the next two to three days.

The aftershocks overnight made for an unimaginably uncomfortable night for the some 1,700 people who were forced to spend the night in emergency evacuation centres, local Osaka government officials said.

A 4.0-magnitude aftershock hit the region early Tuesday, the meteorological agency said.  Electricity outages caused by the quake have been resolved, but restoring gas and water will take longer, officials said.

The education ministry also told AFP that it would instruct education boards nationwide to inspect school buildings, after the death of the nine-year-old girl at her school.

More than 500 primary and secondary schools in Osaka and four other prefectures suffered damage to their buildings including collapsed ceilings and broken window glass, the ministry official said.

Around 112,000 homes in the quake-hit region remain without gas, according to Osaka Gas Co., who said that gas supply will remain suspended until next Monday, while in some parts of the hard-hit cities of Takatsuki and Minoo hundreds of homes remain without water.