Tomomi Inada, a 57-year old ruling Liberal Democratic Party (LDP) lawmaker and close ally of Prime Minister Shinzo Abe, also singled out North Korean provocations and Chinese use of “force” in territorial disputes on her first day in the job.

"Whether you would describe Japan's actions as an invasion depends on one's point of view. I don't think it is appropriate for me to comment" Inada said at a briefing at her ministry when asked repeatedly to clarify her views on wartime history. 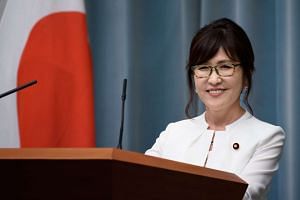 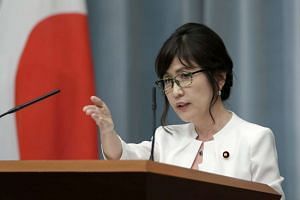 Her failure to condemn Japan's actions up to and during WWII could anger neighbours, including China and South Korea, which have repeatedly called on Japan to apologise.

China says Japanese troops killed 300,000 people in the city of Nanjing in 1937 while a post-war Allied tribunal put the death toll at about half that number.

Some conservative Japanese politicians and academics deny that a massacre took place, or they put the toll much lower.

"It's important for the facts to be looked at objectively," Inada said.

She has called for a revamp of Japan's war-renouncing constitution to ease the constraints on the military operating overseas and has also been a regular visitor to Tokyo's Yasukuni Shrine for war dead that neighbours, including China and South Korea, see as a symbol of Japan's past militarism.

When asked on Wednesday if she would visit it again ahead of the Aug 15 anniversary of Japan's surrender in 1945, Inada  she declined to give a straight answer, saying that such a decision is a “matter of the heart”.

Her predecessor at the ministry, Gen Nakatani, stayed away during his term.

Inada, who was a lawyer before becoming a lawmaker in 2005, is known for a revisionist view of WWII that plays down or denies atrocities by Japanese troops and paints its aggression as an act of liberation against colonial powers.

She has also questioned whether Japan forced women from Korea and other countries into military brothels, In 2007, she supported a full page announcement in the Washington Post that the women had worked as licenced prostitutes.

When asked at Thursday's briefing if her view on the issue had changed, Inada declined to comment.

Inada, who was previously LDP policy chief, was one of three lawmakers reportedly denied entry into South Korea in 2011 because they planned to visit islands that both countries claim.

“China has rapidly become active in waters and airspace surrounding (Japan) and it continues its attempt to change the status quo through force,” Inada said on Thursday.

The comments were an apparent critique of the Asian giant’s reinforcement of reefs and rocks in the South China Sea claimed by Beijing and several Southeast Asian countries.  Japan is also embroiled in a long-running territorial dispute with Beijing over uninhabited islands in the East China Sea.

Inada also criticised North Korea, which fired a test missile that landed in Japanese-controlled waters on Wednesday for the first time.

“North Korea is repeating militarily provocative acts such as nuclear testing and a series of ballistic missile launches,” Inada told troops after performing a ceremonial review on Thursday.

Her views include a desire to make changes to Japan’s US-imposed constitution that renounces the right to wage war.  She wrote in 2011 that Japan – the only country in the world to suffer atomic bomb attacks – should consider acquiring nuclear weapons.

But she told reporters that Japan “should not consider arming itself with nuclear weapons at this moment”.

In 2014, Inada and Sanae Takaichi, who was retained by Abe on Wednesday as internal affairs minister, were seen in separate photographs standing next to the leader of a Japanese neo-Nazi party.

Spokesmen for both lawmakers acknowledged at the time that the photographs were genuine and had been taken in their offices over the previous few years, but denied any political affiliation.

According to a Kyodo News Agency poll taken this week, 43.0 per cent of respondents opposed Inada’s appointment as defence minister, while 32.1 per cent supported it.