TOKYO (REUTERS) - Japan's health minister said in response to a petition seeking a ban on requiring women to wear high heels at work that such dress code expectations are "necessary and appropriate" in the workplace.

Health Minister Takumi Nemoto responded on Wednesday (June 5) to an online campaign gaining attention in Japan under the hashtag #KuToo, a play on the Japanese words for shoe, "kutsu", and pain, "kutsuu".

The petition, which has collected 21,000 online signatures and is still growing, was submitted on Monday to the health ministry by Ms Yumi Ishikawa, a 32-year-old funeral parlour worker.

She said on Twitter in January that she was required to wear 5cm to 7cm heels at work, causing her feet to hurt.

Many Japanese companies may not explicitly require female employees to wear high heels but many women do so because of tradition and social expectations.

"I think it's within the range of what's commonly accepted as necessary and appropriate in the workplace," Mr Nemoto said in response to a question from an opposition lawmaker in a parliamentary committee.

However, Mr Nemoto also said it could be considered "power harassment" if employers required female workers who had been injured to wear high heels. 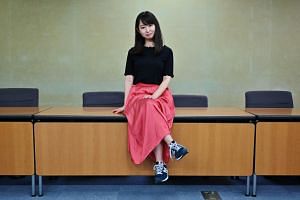 With #KuToo, Japan women kick back at high-heels at work

Ms Ishikawa said on Thursday that Mr Nemoto's comments had pushed the issue even more into the spotlight, and wanted people to debate the issue seriously.

"It seems like men don't really understand that wearing high heels can be painful and lead to injuries," she told Reuters. "But even if women aren't hurt, I'd like such expectations to be considered power harassment," she said.

Ms Ishikawa said Mr Nemoto's remarks might prompt some women to bring the issue up with their bosses. "This might spur that kind of action, so I think this is going in a good direction," she said.

The health ministry said it was reviewing the petition and declined to comment further.