NAGASAKI - A university in Japan said it would not hire professors or teachers who smoke, a move that apparently is a first by a state-run university, Asahi Shimbun reported.

However, Nagasaki University officials said exemptions to the rule will be allowed if applicants promise to quit the habit after taking up the post.

The new policy announced on April 19 reflects a growing trend to ban smoking in all public spaces in Japan, including restaurants and bars, in the lead-up to the 2020 Tokyo Olympics and Paralympics, the report said.

"Our job as a university is to nurture human resources, and we feel obliged to to discourage people against smoking as some companies have begun not recruiting smokers," said Shigeru Kono, president of the university.

An official of the Ministry of Health, Labour and Welfare admitted to "never having heard of such a policy being implemented by a state-run university", according to Asahi Shimbun. 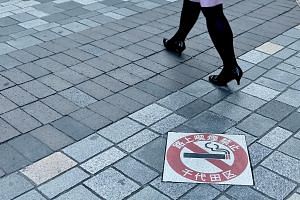 A blanket ban on smoking within the university premises by teaching and other staff will take effect from August. Teachers and students will be prohibited from carrying cigarettes or lighters from next April.

Smokers account for approximately 8 per cent of the university's faculty staff, the report said.

A doctor specialising in psychosomatic disorders will be on hand from May to help those who are having difficulty giving up smoking. Teachers and students who smoke will be encouraged to see the doctor, Asahi Shimbun said.