TOKYO (AFP) - Japan will for the first time next month lift an evacuation order in one of two towns where the crippled Fukushima nuclear plant is located, officials said on Tuesday (March 26).

It will be the first time the government has lifted an evacuation order in the towns - Okuma and Futaba - that host the Fukushima Daiichi nuclear plant.

"We will be able to take the first step forward (towards reconstruction) eight years later," the official quoted Mr Watanabe as saying.

In March 2011, a massive tsunami caused by an earthquake slammed into Japan, killing more than 18,000 and setting off the worst nuclear accident in a generation.

Japan's government has lifted evacuation orders across much of the region affected by the meltdown - allowing residents to return - as Tokyo has pressed an aggressive decontamination programme involving removing radioactive topsoil and cleaning affected areas. 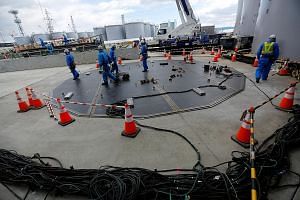 But not everyone has been convinced, with a poll conducted in February by the Asahi Shimbun daily and Fukushima local broadcaster KFB finding that 60 per cent of Fukushima region residents still felt anxious about radiation.

No one is officially recorded as having died as a result of radiation from the accident, but last year, the government for the first time acknowledged the death from cancer of a man involved in the clean-up.

More than 3,700 people - most of them from Fukushima - have died from illness or suicide linked to the aftermath of the tragedy, according to government data.

As of the end of February, around 52,000 people remain displaced because of evacuation orders or because they are unwilling to return, according to Japan's Reconstruction Agency.