The two Koreas have agreed to march together at Friday’s opening ceremony under the unification flag – a pale blue silhouette of the peninsula – which will also be used by their combined women’s ice hockey team.

The flags used at the joint team’s practice match against Sweden on Sunday showed a blue dot indicating islands in the Sea of Japan controlled by South Korea, which refers to them as Dokdo.  But they are also claimed by Japan, which calls them “Takeshima”, and Tokyo reacted furiously, lodging a diplomatic protest. Its chief cabinet secretary Yoshihide Suga called the flag “unacceptable”.

South Korea and Japan are both US allies and both threatened by nuclear-armed North Korea, but their relationship is heavily coloured by historical issues – Tokyo brutally colonised the peninsula from 1910-45, and used hundreds of thousands of Korean women as sex slaves during the Second World War.

Japanese Prime Minister Shinzo Abe is due to attend the Winter Olympics opening ceremony on Friday and Seoul backed down over the flags on Tuesday.

“Our basic stance is to respect the IOC’s decision concerning the use of the Korean peninsula flag... in particular, for IOC-run events,” foreign ministry spokesman Noh Kyu Duk told journalists.

Sunday’s match was organised by the Korea Ice Hockey Association, separately from the Olympics, he added.

The new spat comes a month after Japan opened a museum in Tokyo devoted to the disputed islands, drawing an immediate protest from South Korea. 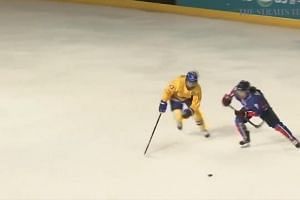 Protests as unified Korean hockey team debuts ahead of Olympics

Unified Korean flag harks back to warmer ties of old

The museum, run by the Japanese government, also displays documents and photographs defending Japan's claims over another set of islands disputed with China.

The controversial flag has already been waved by spectators during a women's ice hockey practice match between Sweden and the unified Korean team.

Japanese Prime Minister Shinzo Abe will travel to South Korea for the opening ceremony of the Games, where he is expected to hold talks on Korean "comfort women" used by the Japanese as war-time sex slaves - another thorny issue between the two countries.